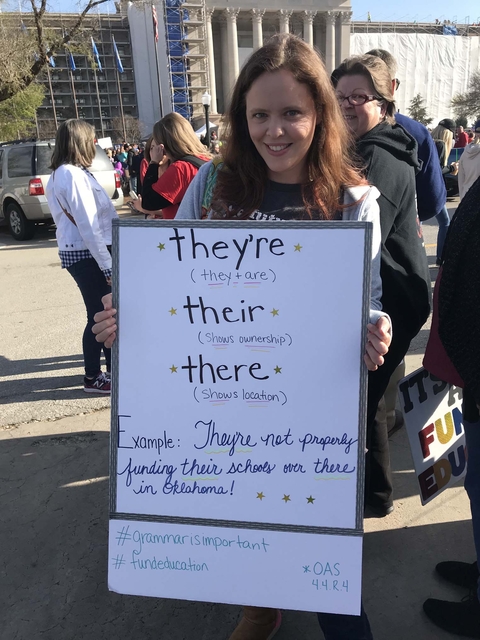 Teachers continue day six of their rally at the Oklahoma capitol. Photo by Robin Dorner.

“They started this,” one Oklahoma Attorney cried out as she walked toward the Oklahoma state capital.

Today, nearly 200 Oklahoma attorneys marched from the Oklahoma Bar Association to the state capital in support of Oklahoma teachers.

Heim added, “But we are number one or two in prison incarceration. That’s why we’re here. For whatever reason, our legislature refuses to see how important our children are for the future of Oklahoma.”

“Educators have been passionately advocating for their students and asking the legislature to provide more funding for our classrooms after a decade of neglect of Oklahoma’s public schools,” said Oklahoma Education Association (OEA) President Alicia Priest in a statement.

OEA stated their appreciation for the legislature passing the ‘ball and dice’ legislation (HB 3375) and the Amazon tax bill (HB 1019xx).

“Because of the educators, parents and students who have taken to the Capitol this past week, the new funding for Oklahoma’s students nearly doubled to $92 million,” Priest added. “While this is a step forward, the repeal of the hotel/motel tax, HB 1012xx, is just the opposite,” adding the bill is supported by the public and would be paid for by non-Oklahomans.

“We call on Governor Fallin to immediately veto HB 1012xx because it steals $42 million in funding away from Oklahoma’s students.”

OEA members will be at the capitol on Monday to fight for the passage of capital gains legislation. Teachers are using sick days or snow days to participate in the daily events. It is against the law for public employees to strike in the state of Oklahoma.