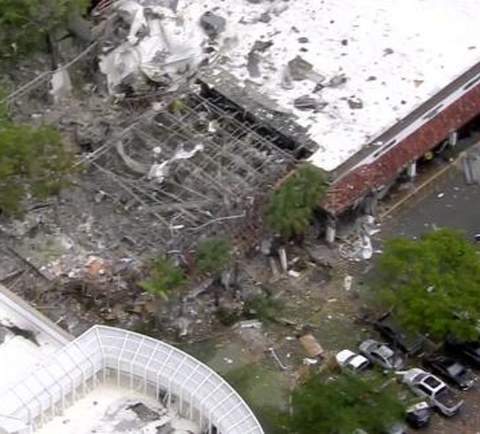 Wreckage after an explosion at a shopping mall in Plantation, Florida.

At least 21 people were injured Saturday -- two seriously -- after an apparent gas explosion shattered parts of a shopping mall in the South Florida city of Plantation, authorities said.

Firefighters were searching for other injured people but believe all have been taken to hospitals for treatment, said Plantation Fire Department deputy chief Joel Gordon. Gordon said during a Saturday afternoon press conference the search is now complete and authorities believe they located everyone.

Gordon also said a child was injured, but was not classified as seriously injured.

The Plantation Fire Department initially said a gas explosion had occurred. But officials later said they are still confirming the cause.

"We had ruptured gas lines. We did have an active gas leak when we arrived, (but) they were able to secure it," Battalion Chief Joel Gordon said, referring to the Broward County's hazardous materials team that initially secured the lines with TECO, a gas utility company.

"At this point, we have not actually confirmed that it was an explosion due to gas," Gordon said. "We believe that. That's what it appears to be."

"There is no more gas leak," he said.

News footage and social media video showed firefighters arriving at the mall, where windows were blown out of an LA Fitness. A section of the complex appeared to sustain significant damage, with shattered windows and scattered debris.

Gordon told CNN the access road to the mall was covered in debris when firefighters arrived. Gas lines in the mall had to be secured before first responders encountered the injured scattered throughout the complex.

"We also have patients that wandered away and came back again," he said.

The state fire marshal, other local agencies and the federal Bureau of Alcohol, Tobacco, Firearms and Explosives are investigating the cause.

Gordon said there was an active gas leak at the scene when firefighters responded about 11:30 a.m.

The blast appeared to have occurred in a corner of the mall complex where two buildings intersect.

"There is a closed pizza place right on the corner but we haven't confirmed it originated there," he said.

Plantation police tweeted: "All stores and businesses in the area of the Fountains Plaza and the Plantation Marketplace plaza near LA Fitness will be shut down until further notice until Fire Personnel can determine that it is safe to return. Please do not come into this area if possible."

It's unclear if the mall was open at the time of the explosion. Gordon said the LA Fitness was occupied.

In one social media video posted after the blast, people are seen surveying the aftermath, which included damage to cars and water cascading from an upper floor of a building.

"The whole building blew up," a man is heard saying in one video.

"A bomb just went off," a man says in a video sent to the station.