Legislators whine about pay cut while many Oklahomans live in poverty 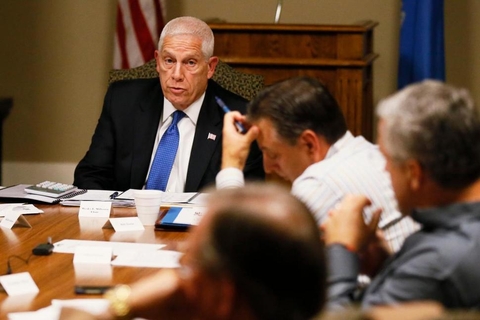 In 2014, Oklahoma legislators voted to ban an increase on the state’s minimum wage, yet they are some of the highest paid state officials in the country.

Since 1997, Oklahoma legislators annual base pay has been $38,400. With per diem pay for travel, and meal reimbursement, and health and retirement benefits, their total average compensation is about $62,000 per year.

Although 16.1 percent of Oklahomans live below the poverty line of $24,250 annually, many with no benefits, some legislators are complaining about their upcoming $3,379 annual cut in pay.

“Reducing pay is a misguided attempt to punish since it impacts future legislators,” said State Rep. Todd Thomsen, (R-Ada) according to a Special Report in the Enid News.

Ironically, the above Oklahoma GOP legislators voted “yes” in 2014 to ban an increase in the minimum wage in Oklahoma. Governor Mary Fallin signed the bill in April 2014, citing potential harm to the business community.

But Jason Murphey (R-Guthrie) said, “I really supported those legislative pay cuts. I always felt that it was wrong for Oklahoma to have some of the highest salaries for a part-time legislature. I thought it was a big win for the taxpayers.”

Murphey has a part-time job and is able to donate about $7,000/yr. to charity.

Dollens said, “Unfortunately, the state’s Constitution excludes me and other certified teachers from earning extra income as a substitute teacher.”

Rosecrants was making $35,000 a year as a teacher. He saw his pay increase when he reported for work at the State Capitol.

Now, Rosecrants said he needs a second job. “I will be looking for a stable part-time job within the year, especially because our pay is to be cut.”

Meloyde Blancett (D-Tulsa) said, “While my legislative plan isn’t solely my income, it’s darn close to being it after this last 12 months,” said the freshman house member. "While I went into this endeavor with eyes wide open and intent on trying to make a difference, I was naïve about what it truly required - monetarily, physically and emotionally.”

In November, Oklahoma's Legislative Compensation Board, a nine-member appointed panel, voted 4-3 to reduce the base pay of Oklahoma legislators by 8.8 percent from $38,400 to $35,021, effective in November 2018, according to a report by the Associated Press. The additional pay for House and Senate leaders also will be reduced.

A lawmaker making $38,400 annually makes about $18,46 per hour aside from their per diem pay. The pay cut would bring their hourly rate for the legislative period to about $16.83/hr.

In Oklahoma, the median household income for a family is about $49,000, according to *OMES.

Some information in this report obtained from the *Oklahoma Office of Management and Enterprise Services.