LGBT+ rights group has a message for Trump: “We will not be erased” 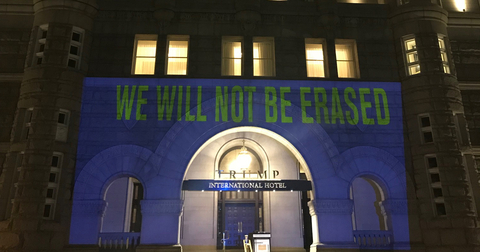 Last week, analysts at the Centers for Disease Control and Prevention (CDC) were told to stop using seven words in official papers, including the word “transgender.”

The Human Rights Campaign (HRC) found a creative way to get Donald Trump‘s attention: they projected the words on the Trump International Hotel in Washington, D.C.

HRC also projected “We will not be erased.”

In conjunction with the enormous light display, HRC has filed a Freedom of Information Act (FOIA) with the Department of Health and Human Services (HHS) for any and all records, including communications with the CDC, relating to the banned words from November 2016 onward.

“Our message for the Trump-Pence Administration is this: you cannot erase us. We will meet attacks on our community with a resolve to be louder and more visible than ever before,” said David Stacy, HRC’s Director of Government Affairs.

“Furthermore, the American public deserves to know the degree to which the Trump-Pence Administration has interfered with the life-saving work of the CDC. It was not long ago that the government tried to ignore the reality of the HIV and AIDS crisis to the detriment of millions. This kind of erasure has potentially catastrophic consequences beyond the words used by the CDC — it could impact the very programs most vital to the health of transgender people, women, youth and others.”