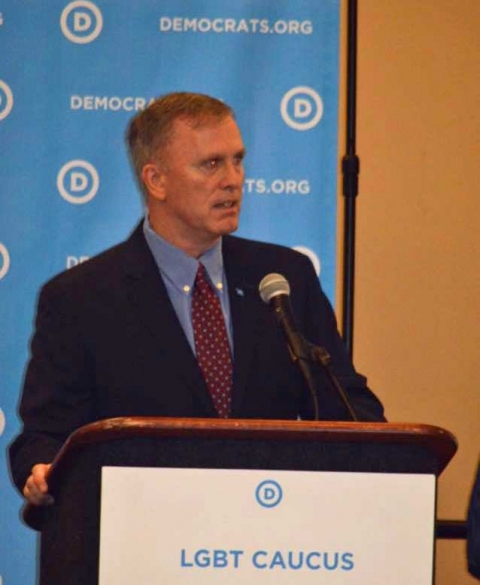 Michael Adams, President of SAGE, speaks Thursday to the LGBT Caucus at the Democratic National Convention. Photo by Robin Dorner.

Lesbian, gay, bisexual, transgender and queer seniors took the spotlight at the Democratic LGBT Caucus meeting Thursday before the Democratic National Convention convened for its last session. Michael Adams, the Executive Director of SAGE, (Services and Advocacy for Gay, Lesbian, Bisexual and Transgender Elders) was introduced to the meeting by Earl Fowlkes, the President of the Center For Black Equity.

Adams reflected on the history of the LGBT equality movement, saying, "We stand on the shoulders of elder pioneers who fought through …everything…to pave the way for the equality and justice that we have won today."

SAGE members are advocates for gratitude for our elders, said Adams. “SAGE exists to ensure all across the country elders are honored and celebrated for contributions they’ve made and continued to make.

The organization was founded in New York City in 1978 by a small group of LGBT activists of all ages who recognized that LGBT people did not have the support they needed to age in good health and with financial security. Originally known as Senior Action in a Gay Environment, the founders set out to create that network of support, first in New York City and then nationwide.

Over time, it became clear that the number of older people in the U.S. was expanding rapidly, with the number of LGBT older adults expected to double by the year 2030. A robust network of organizations and individuals emerged across the country to address the widespread social isolation, financial insecurity and health care disparities facing LGBT older adults.

And this network increasingly turned to SAGE for its pioneering programs and work to improve the lives of LGBT elders. SAGE began to build a nationwide presence, becoming a vital leader on LGBT aging issues. SAGE now has 28 affiliates in 20 states and the District of Columbia providing services, programs and advocacy for LGBT elders in local communities across the country.

The Democratic platform says, “We will support LGBT elders, ensure access to necessary health care, and protect LGBT people from violence— including ending the crisis of violence against transgender Americans.”

The Republican Party platform, on the other hand, endorses the First Amendment Defense Act, which would institutionalize discrimination against LGBT people. Although it “denounces” bigotry, they don’t include sexual orientation or gender identity in the groups of people they hope to protect.

Adams introduced two leaders for LGBT elders, Congressmen Mark Takano (D-CA) and Mark Pocan (D-WI). Both Takano and Pocan have pushed for an LGBT justice act, and an aging task force in the Congressional LGBT Equality Caucus. Pocan is co-chair of the Caucus.

Rep. Takano took the stage, saying, “I’m proud to be Democrat, how about you?” He celebrated HUD’s July 2015 guidance ending discrimination against LGBT elders in federally supported or insured housing, and the recent order by Secretary of Defense Ash Carter ending the ban on transgender military service.

Takano praised Rep. Pocan, who has pushed for an apology to LGBT military members discharged for being LGBT. He noted that we, “still have work to do there,” and added, “think about what Donald Trump has done making Mike Pence his VP.” He asked, “What values that shows,” calling attention to Pence’s fight for conversion therapy.

Representative Mark Pocan then took the stage, saying he hails from Wisconsin, home of first open lesbian in the US Senate, Senator Tammy Baldwin. He also noted that his state was the first state in the nation with an LGBT nondiscrimination bill, signed at the time by a Republican governor.

“My how times have changed,” he noted. “Here we are with full marriage equality in every state in the union.” He said, “when the public realized those attacks [on LGBT rights] were false, that’s when we started having success.”

Pocan called out the GOP convention, saying it “shows how much more work we have to do.” He pointed out that GOP VP nominee Pence, and Donald Trump himself, are “more worried about who’s in bathrooms than who’s buying guns.”

He reminded attendees that in his acceptance speech, “Donald Trump himself garbled out L-G-B-T; it felt like if you asked the number pi – 3…point…1…4…”

Pocan advocated for Hillary Clinton’s election, noting, “You can get married Friday but be fired Monday and subsequently lose your housing.”

Thirty states do not protect LGBT persons against discrimination. He said, “We must stop this injustice.”

Rob Howard, The Gayly Associate Editor, contributed to this story.