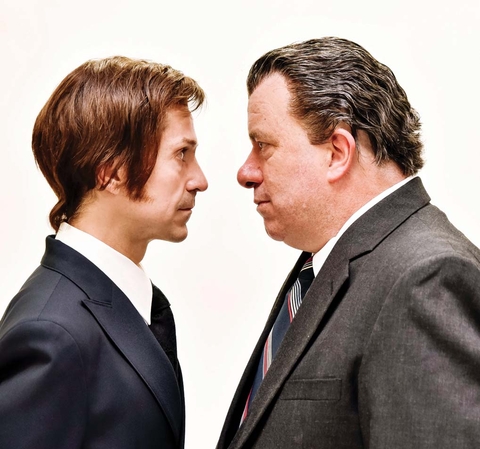 Politics and the press will collide next month as Lyric Theatre presents the Oklahoma City premiere of Frost/Nixon.

The play by Peter Morgan is based on a series of televised interviews that former U.S. President Richard Nixon granted British broadcaster David Frost in 1977 about his administration, including his role in the Watergate scandal.

Morgan’s script gives theatre-goers a behind-the-scenes look at one of the nation’s most memorable moments between a U.S. president and the media. British talk-show host Frost has become a lowbrow laughingstock and Nixon has just resigned as president disgraced over Vietnam and the Watergate scandal.

Determined to resurrect his career, Frost risks everything on a series of in-depth interviews to extract an apology for the American people from Nixon. However, Nixon is equally bent on redeeming himself in his nation’s eyes. In the television age, image is king, and both men are desperate to out-talk and upstage each other as the cameras roll.

The result is the interview that sealed a president’s legacy.

The play originally premiered in London in August 2006 and opened on Broadway the following year, earning three Tony Award nominations, including one win for Frank Langella as Nixon for Best Performance by a Leading Actor in a Play.

Langella subsequently received the Drama Desk Award and Outer Critics Circle Award for the same role. Ron Howard, a Hollywood director originally from Oklahoma, directed the 2008 film adaptation of the play of the same title, which reunited its original stage stars, Langella as Nixon and Michael Sheen as Frost.

Lyric Theatre of Oklahoma was founded in 1963 and is the state’s leading professional theatre company. Lyric produces classic and contemporary musicals, new works, and plays featuring artists from Oklahoma and around the nation. Shows are presented at two Oklahoma City venues — the intimate Plaza Theatre and in the summer at the grand Civic Center Music Hall.

Lyric's Thelma Gaylord Academy is the premier professional theatre training ground, offering classes in all aspects of the performing arts. Lyric is a nonprofit member theatre of the National Alliance for Musical Theatre and Allied Arts. For more information, visit www.LyricTheatreOKC.org.