May the “flair” be with you 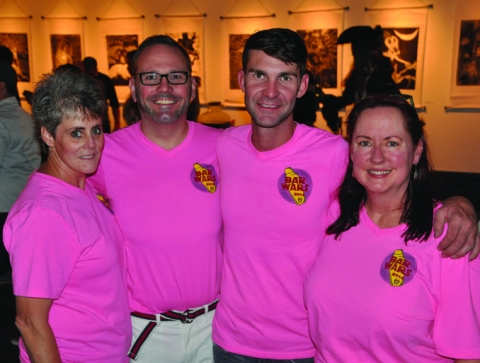 What started out as a “little cocktail party” four years ago has now become the largest cocktail themed event in the city. Metro restaurants armed with a signature cocktail face off in a sequel that promises to be more epic than the original.

“We do our best every year to make Bar Wars better each year,” said event co-chair David Rackley. “We have a committee that works to take it to that next level each time. I think it is an event that really evolves each year and we build on the success of each year.”

The bars who support the event don’t get paid at the end of the night. They do get bragging rights, the winner(s) get a trophy for their bar and a lot of publicity, Rackley said.

“These bartenders and bar owners know they are not making a dime off the event and are truly ‘doing it for the cause.’”

“The cause” is Other Options and Friends Food Pantry, Inc. (OOI). Funds raised will be used to support the mission of OOI, a local non-profit organization that provides food and services to individuals and families affected by HIV and AIDS. Additionally, OOI hosts a HOPWA Program (Housing Opportunities for People Living With AIDS) and a Humanitarian Medication Program which ships recycled medications to third world countries.

Bar Wars attendees get to vote on their favorite drink with their vote ticket they get as part of their ticket price. At the end of the evening all votes are tallied and the top two cocktail winners are announced. The two winners get to serve their cocktails for the last 30 min of the evening while the others shut down.

The competing bartenders will be representing some of Oklahoma City's favorite establishments including The Boom, 809 Sports Grill, Rococo, Whiskey Cake, Joey’s Pizzeria, WSKY Lounge, Apothecary, Guernsey Park, Copa, and VZD's, as well as some new and exciting additions to the Oklahoma City nightlife. Rockford will be joining us as they celebrate their opening just prior to the event.

“Because we all like a show, there is also a ‘best in show’ for the bartenders who decorated their bar area or showed their ‘best in flair.’ That will be voted on by a panel of judges,” added Rackley.

“One year we had a sushi model on the table the whole night covered in sushi, leaves and not much else. They bring their ‘A’ game for sure!”

This year there is no separate designation of a VIP ticket.

“That way everyone gets to enjoy every aspect of the event,” Rackley said in conclusion.

The ticket prices are $75 for general admission to sample each of the ten bar/contestants one time. You get one vote included with that price. If you prefer, there is a $15 designated driver ticket price.

The event is packed full of entertainment with music provided by DJ J2O. There will be a cash bar and the silent auction will feature gift packages from local salons and spas, event tickets, custom home furnishings, gourmet foods, wines and more.

The event will be held Saturday, October 17, from 7 p.m. - 12 a.m. at IAO Gallery, located at 706 Sheridan on historic Film Row. Purchase tickets at the door or in advance at www.OtherOptionsOKC.org.

Dress in your casual attire – and may the “flair” be with you.

About Other Options: Other Options mission statement is focused on non-discriminating, compassionate care to those in need. The purpose of Other Options, Inc. is to provide food, resources, services, and education to at-risk individuals and families with a focus on those affected by HIV and AIDS.