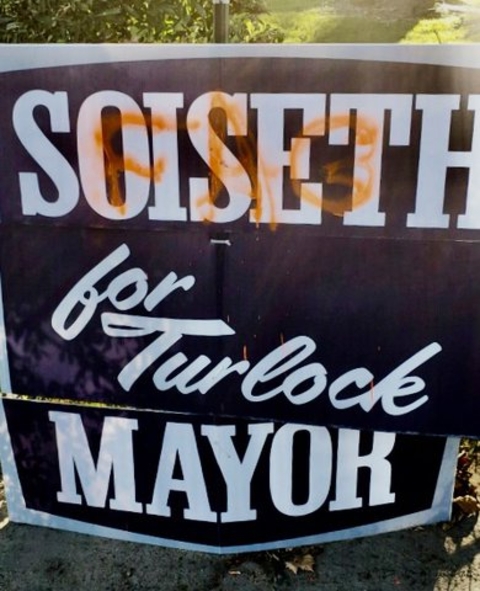 At a busy Turlock, CA intersection, a political statement was covered up with messages of hate.

“The location of this is really quite intentional," Sarah Beekman explained.

Supporter Sarah Beekman was the first to find one of multiple defaced signs.

“There it was and I was shocked. I was very angry,” Beekman said. “We all want to pretend that we live in this wonderfully constructive world. But there is prejudice around us.”

Soiseth is the first openly gay Mayor in Turlock.

“It was so hurtful and so deliberate,” Soiseth said.

Now, he's trying to wrap his head around why someone would attack his sexuality.

“People that don’t support me. This doesn’t reflect them. They have a policy difference with me or they don’t like my style but it’s not about my sexuality or anything like this," Soiseth said.

While Soiseth tries to keep his focus on the campaign, the Turlock Police Department is investigating the incident as a hate crime.

“We have the ability to come together and embrace our differences. Whether it be different cultures, or backgrounds or religions. We can’t let just one small group dictate who we are as a community," Soiseth said. "So, I’m not going to let this define who Turlock is.”

"We’ve reached a new low when it comes to campaign tactics in Turlock. In addition to dozens of signs being stolen from yards and businesses over the last few weeks, last night someone chose to deface some of our signs with a homophobic slur: ***.

We’re doing our best to clean up and replace these signs immediately to protect students, families, and citizens from having to see this as they drive around town. If anyone has information regarding who may be responsible for this vandalism please reach out to our campaign.

I ask that we focus on the issues rather than personal attacks. Turlock deserves better than this."

Brad Bates, Turlock mayoral candidate, also released a statement regarding this matter. He says, "this incident is a heinous and contemptible act and is in no way representative of the values of the residents of Turlock. It is a reminder to us all that it takes an entire community to stand fast against the cowardly few."

Mayoral candidate, Amy Bublak released a statement as well saying, "there is no place in a civilized society for attacks based on an individuals race, gender or sexual orientation. I have personally been on the receiving end of very similar slurs. Even having once been openly called a “dyke” by a member of the public during a city council meeting. Sadly, the hateful behavior of a few takes away from public discussion of the real issues in a campaign."

FOX40 reached out to Jaime Franco who is also running for mayor in Turlock but has not yet received a statement from Franco.