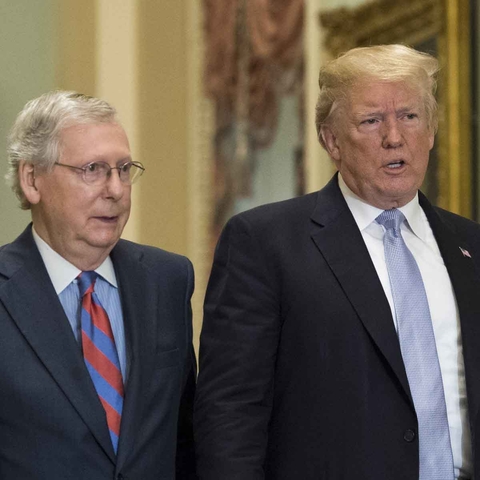 But several, including Senate Majority Leader Mitch McConnell, took a proven path to try and talk Trump down from what they saw as an untenable position on the divisive issue: talk to him directly.

Over the course of several days, Republican lawmakers attempted to dissuade Trump from his stated idea that Republicans should craft a new replacement plan, according to multiple sources.

The focus, some argued, should be on prescription drug costs. But definitely staying away from a fractious intraparty debate that House Republicans like Minority Leader Kevin McCarthy firmly believe cost the GOP the House in the 2018 midterms.

Or in what several sources called the most persuasive argument: framing the election around Democratic calls for Medicare-for-all. That was a specific message from McConnell in a weekend phone call, the sources said.

The point was that with Democratic presidential candidates -- not to mention the energy of the progressive base -- are lining up behind the proposal, it provided a ripe target for the party. Add to that any Senate Republican effort this Congress would be completely rebuffed by House Speaker Nancy Pelosi, and that defending Obamacare was a unifying issue for Democrats. It makes political sense, rather, for Republicans to be patient rather than throw out their own -- potentially unpopular -- plans.

"(Trump) has some big ideas and to his credit wants to solve problems. That's what leaders do," said Sen. John Thune, R-South Dakota. "But you run into that wall of reality at some point, and, I think, trying to convey what the obstacles are to getting done what he wants done, done in the next two years, is something a number of our members conveyed to him."

Republican campaign arms and outside groups had already launched initial salvos attacking the Medicare-for-all proposal, (or in McConnell's parlance: "Medicare-for-none") and are working on shifting the focus at this stage could create new openings for frontline Democratic candidates and risks for Trump himself.

McConnell and other Republican lawmakers have also already spent time attacking Democrats on the proposal in floor speeches and press conferences themselves.

"I look forward to seeing what the President is proposing and what he can work out with the speaker," McConnell told Politico in a brief interview last week. "I am focusing on stopping the 'Democrats' Medicare for none' scheme."

The White House did not immediately respond to a request for comment on Trump's calls with McConnell.

The calls, especially McConnell's, had an impact on the President, who, according to one of the sources, secured the commitment that Trump would instead focus his energy on attacking Medicare-for-all and wait to see what the election led to before moving forward on any legislative efforts.

It was a framing reflected by the President himself in a tweet thread Monday night, that amounted to a full flip from his claims last week, and once again displays his haphazard approach to policymaking.

"Everybody agrees that ObamaCare doesn't work," Trump tweeted. "Premiums & deductibles are far too high - Really bad HealthCare! Even the Dems want to replace it, but with Medicare for all, which would cause 180 million Americans to lose their beloved private health insurance."

"The Republicans are developing a really great HealthCare Plan with far lower premiums (cost) & deductibles than ObamaCare. In other words it will be far less expensive & much more usable than ObamaCare," Trump said. "Vote will be taken right after the Election when Republicans hold the Senate & win back the House."

But one White House official said Trump's tweets "shouldn't be misunderstood to mean we won't be pushing our own version of health care -- basically health care policy principles."

The official said Trump is acknowledging the reality that there is not much hope for "Trumpcare" -- whatever that plan might be -- to make it through a Democratic-controlled House.

"He's just being realistic that there's no room for bipartisanship on this prior to 2020," the official said.

A separate senior White House official said Trump is simply stating more explicitly what White House aides have always known: that there will be no bill to replace Obamacare that can get through this Congress.

However, the official said "there is every intention of having a proposal" that Republicans can put on the table.

And yet, multiple White House officials Tuesday morning declined to commit that the President would actually release a plan before the 2020 election.

When asked by CNN if the President will commit to releasing a plan before the election, White House press secretary Sarah Sanders said she would not answer the question, saying only the President wants to talk about "principles."