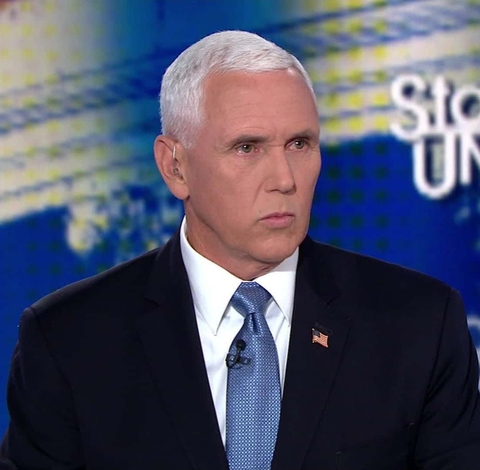 During a speech to the American Legion, Vice President Mike Pence claimed Wednesday that under the Obama administration, Veterans Affairs hospitals had removed Bibles and banned Christmas carols. His claim follows the VA's announcement of revised policy around religious literature and symbols.

"This administration will always make room for the spiritual needs of our heroes at the VA," Pence told the crowd, before citing a lawsuit to have a World War II Bible removed from a memorial table.

"It's really no surprise," Pence said, "because under the last administration, VA hospitals were removing Bibles and even banning Christmas carols in an effort to be politically correct."

Facts First: There are a handful of instances in which Bibles were removed from displays at VA hospitals during the Obama administration and at least one instance of religious carols being banned in the public area of a VA hospital. But these instances, some of which were reversed after protests, were the result of decisions by local staff, not directives from the Obama administration.

What do the new policies do?

As previously reported by CNN in July, the Trump administration instituted new policies at the VA that will:

The VA has noted that these policies are meant to clarify previous policies, which they suggest created confusion about the display of religious symbols at VA facilities.

In the press release announcing these changes, the VA said this "move aims to simplify and clarify the department's policies governing religious symbols, and spiritual and pastoral care, which have been interpreted inconsistently at various VA facilities in recent years, resulting in unfortunate incidents that interrupted certain displays."

Some of those past cases cited by Pence have been reversed after pushback from conservative groups, veterans and volunteers.

In 2013, students were banned from singing Christmas carols with a religious theme at a VA hospital in Georgia. At the time, a spokesman for the hospital said that the ban was "out of respect for every faith" in the VA. When the conservative group Alliance Defending Freedom got involved, however, the hospital changed their minds. "After receiving a letter from ADF and meeting with the leadership from the school, the VA Medical Center reversed course and publicly announced that it would welcome back the Christmas carolers," Matt Sharp, ADF Senior Counsel, told CNN.

There have been a few reports of Bibles being removed from memorials in VA clinics. Specifically, Pence cites the recent example of a Bible being removed from a memorial in a VA hospital in New Hampshire. The Bible -- which belonged to a World War II prisoner of war -- was initially removed from a memorial table following a complaint by the group Military Religious Freedom Foundation. The Bible was then put back on the table following complaints by veterans. There is now a federal lawsuit filed to have the Bible removed.

The new policies enacted by the Trump administration will not stop these types of lawsuits and may, in fact, increase their occurrences given the more lax nature of the new rules.