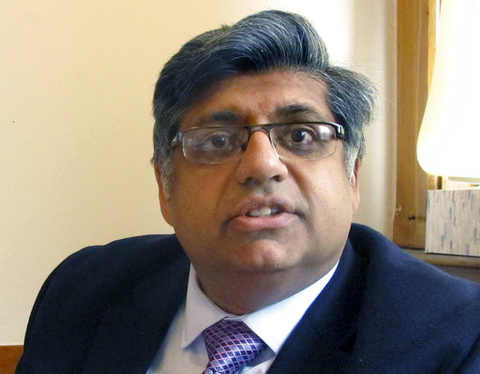 MONTPELIER, Vt. (AP) — Vermont Democrats have elected a new leader who switched parties in response to discrimination he faced as a Muslim while running for the Legislature as a Republican a decade ago.

Faisal Gill, a Burlington attorney, was born in Pakistan and moved to the U.S as a child. The Navy veteran ran as a Republican for the Virginia House of Delegates in 2007 and lost.

While campaigning in Virginia, he said he faced discrimination from voters and Republican county committee members who had come to his house for barbeques but later turned on him.

"It was all right when I'm a volunteer," he said of his stint as a Republican. "I'm OK when I was vice chairman of the county committee. It's OK when I give money. But when I want a seat at the table, that's not OK."

Previously he'd served in the Department of Homeland Security under the administration of President George W. Bush, a position he opted to leave after he was accused by news media of lying on his security clearance forms. He was cleared of wrongdoing by the department.

He went on to run unsuccessfully for the House of Delegates, facing discrimination that he said made him rethink some of his stances and ultimately, his GOP affiliation.

"I would say the marriage issue, the LGBT issue, in and of itself was one of the primary reasons why I switched," he said.

He moved to California then returned to the East Coast. In 2012, he settled in Vermont, among the whitest states in the country, where he said he has not felt any discrimination.

Since being elected chairman of the Vermont Democratic Party last month, Gill has "hit the ground running," said vice chairman Tim Jerman, who told the Burlington Free Press that some Democrats backed Gill to send a message to President Donald Trump about diversity and inclusion.

"He is a symbol," Jerman told the newspaper. "He doesn't mind being in that position."

The Vermont Democratic Party said Gill is the country's first Muslim state party chairman, a distinction that neither the Democratic National Committee nor an organization that has launched a campaign to get more Muslims into politics could confirm.

It's a natural progression for any new American community who comes to this country looking for an opportunity to become involved, said Democratic strategist Mustafa Tameez, of Houston, Texas. But because of anti-Muslim rhetoric taking place, he added, especially in the last presidential campaign, there's more energy behind it now.

"Because most people that live in this country feel American and when you tell them they're not actually American, they're likely to get more engaged and involved," he said.
_