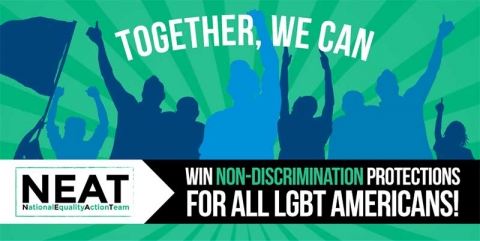 The coalition will recruit volunteers and provide organizing support in priority legislative states this session.

New York / San Francisco- Today, Marriage Equality USA (MEUSA) and Freedom for All Americans (FFAA) announced that FFAA will serve as the new coalition chair of NEAT, the National Equality Action Team. MEUSA, the previous chair of the coalition, will be closing as an organization this Spring and has transferred its network and resources to FFAA.

NEAT is a grassroots field program that mobilizes supporters of LGBTQ equality and allows anyone, no matter where they live, to play a role in historic campaigns by providing opportunities to engage in direct action, including phone banks, canvassing, and knocking on doors. NEAT was originally formed in 2012 to provide support to ballot campaigns on marriage. Its focus will now permanently shift to LGBTQ nondiscrimination campaigns, beginning with current legislative fights in the 2016 session.

"As opponents to LGBTQ equality attempt to roll back protections in a post-marriage landscape, Freedom for All Americans is the perfect new home for NEAT's advocacy and work," said Brian Silva, executive director of Marriage Equality USA. "No person should be fired from their job, denied services at a business, or kicked out of their home because of who they are or who they love. NEAT works closely with other organizations and volunteers to ensure that no matter where you live or what the status of nondiscrimination laws are in your state, you can get involved and be a part of advancing equality in America."

Silva will continue to serve as director of the program for Freedom for All Americans.

NEAT consists of an innovative coalition of approximately 50 national, regional and local organizations and hundreds of individual organizers, and to date has contributed over 100,000 phone calls and actions in 15 marriage campaigns in order to change hearts and minds and contribute to victories. NEAT's actions are done in coordination with the local campaigns and leadership.

"Legislatures reconvened only a few weeks ago and already in 2016 we have seen serious attacks on LGBT people in America, with a particularly horrifying focus on transgender children in schools," said Matt McTighe, executive director of Freedom for All Americans. "There is no better time to collaborate with a coalition like NEAT, which empowers local advocates to participate in actions that have a direct and immediate impact on campaigns. A majority of people across the country support nondiscrimination protections for LGBT people, and it's critical that individual Americans make their voices heard and do their part."

NEAT's work is already underway in Massachusetts, where a bill is pending that would ensure that transgender people cannot be turned away or denied service at a public place on the basis of their gender identity; and in Florida, where advocates are working to update Florida’s nondiscrimination laws to include sexual orientation, gender identity and gender expression. For more information, visit www.theNEAT.org