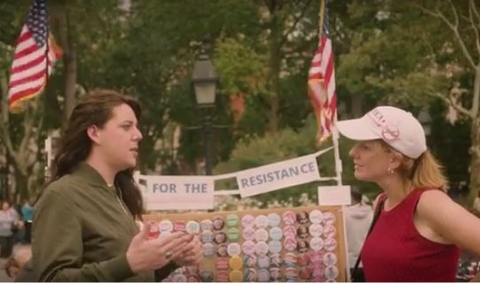 A trio of New Yorkers sets out in search of the “real” America in Bagdad, Florida, a new queer-inclusive series that aims to connect viewers from opposite sides of the political aisle.

In the above snippet of the show, which debuted Dec. 7, the show’s gender-fluid protagonist, We’wha (played by Freckle), encounters a wide range of political viewpoints in New York City’s Washington Square Park.

Over the course of the series, We’wha will fall for a staunch Republican while venturing to Florida with pals Grover (Colt Kenney) and Lillian (Margot Bingham). Portraying that somewhat unlikely relationship is just one way creator Matthew Fifer sees the series as “an olive branch” and “a stick to pop political bubbles.”

“I want people to talk to strangers, even the ones in their own families,” Fifer, who co-created the 2016 web series “Jay & Pluto” with producer Shane Kidd, told HuffPost. “Calling your reps once a month and marching when it’s nice out is great, but if we’re not connecting with the other side on a personal level, we’ve lost. And I don’t mean on a liberal level ― we’re losing as a country.”

Though Fifer stressed that Bagdad, Florida is in “the absurd comedy realm,” he said he “absolutely feels [a] responsibility” to portray the LGBT+ community in a positive light in the series, which will comprise 10-12 episodes released through spring 2018.