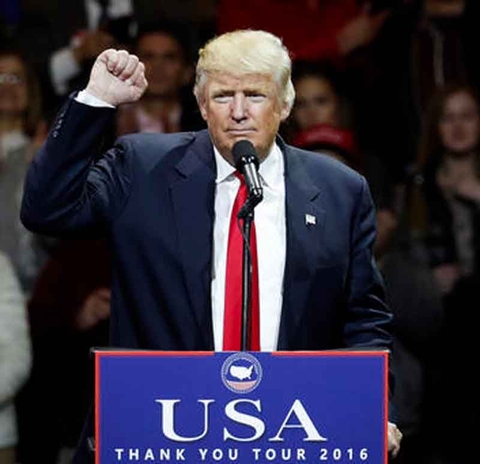 New York (AP) — Donald Trump's skeptics hope the presidency will reveal a serious side of the brash businessman. His supporters want him to keep the freewheeling style that rattled Washington.

In true Trump fashion, so far he's doing both.

Trump has soothed some Republican establishment anxieties with many of his early Cabinet picks, including the respected retired Gen. James Mattis to lead the Pentagon and Georgia Rep. Tom Price, an orthopedic surgeon tapped to head the Department of Health and Human Services. He's hinted that he's open to shifting some of his most controversial policies, including his rejection of climate change and support for torture. He's been full of praise for President Barack Obama and largely respectful of Hillary Clinton, his vanquished campaign rival.

But Trump is also refusing to abandon the raucous, stream-of-consciousness rallies and Twitter tirades that defined his presidential campaign. He's continued to level false statements, claiming without evidence that millions of people voted illegally in the election. And he's infused the normally staid Cabinet selection process with reality television drama, inviting cameras into his dinner with Mitt Romney, a leading candidate for secretary of state, and announcing the secretary of defense pick in an arena, seemingly off the cuff.

Despite his tell-it-like-it-is reputation, Trump is fueled by a deep need to be liked, according to long-time associates. He often modulates his tone to his setting and frequently tries to curry favor with his audience by telling them what he thinks they want to hear. He often speaks in vague generalities, his policy plans short on details, and that allows supporters to read in what they wish.

And sometimes he seems to move in contradictions, as when he made simultaneous appointments of Reince Priebus — a nod to the Washington establishment — and Stephen Bannon — a shot across the establishment's bow — to fill two key roles in his administration, giving opposing factions of his coalition something to cheer.

People who meet with the president-elect personally talk about there being "two Trumps" — the self-promoting celebrity that's seen in public and the amiable and courteous grandfather who emerges in private.

"He's charming in person," said John Allison, the former CEO of BB&T, who recently met with Trump. "He absolutely has a lot of personal charisma."

Indeed, Trump has appeared to win over some of his toughest Republican critics since defeating Clinton. GOP lawmakers have praised all of his Cabinet nominees, some of whom hold more traditionally conservative views than Trump himself. Romney, who was one of Trump's fiercest critics during the campaign, emerged from their dinner this week with warm words for a man he'd only recently called a "phony."

"He continues with a message of inclusion and bringing people together and his vision is something which obviously connected with the American people in a very powerful way," Romney said in a stunning turnabout for the 2012 GOP nominee.

But Trump appears acutely aware that the enthusiastic supporters who propelled him to the White House are watching carefully to see if he'll back away from his pledges to shake up the political system. Supporters shouted their opposition to Romney being in the Cabinet Thursday as Trump stood on stage in Cincinnati for the kickoff of a "thank you" tour for voters.

Trump gave them plenty else to cheer about, fully re-embracing his firebrand and raucous campaign persona.

He took the stage full of swagger and as focused on score-settling as he was during the campaign. He spent more than 10 minutes bashing the press, recounting how the media doubted his chances of winning.

"These are very, very dishonest people," said Trump, one of several times during the night when he incited the crowd to jeer the press gathered in the pen at the back of the arena. "Ok, I love this stuff. Should I go on with this just a little bit longer? I love it." Shifting to how he broke Clinton's so-called Midwest firewall, he said, "We didn't break it, we shattered that sucker. We shattered it, man. That poor wall is busted up."

Trump did hit some of the right notes in terms of unifying the nation when he managed to stick to the script rolling down the teleprompter. He called for a "truly inclusive society, where we support each other, love each other, and look out for each other."

But he also reminisced how "fun" it was "fighting Hillary." He stunned even his own advisers by announcing his nomination of Mattis from the stage. And facing the pressures of the presidency, he seemed to still be reliving and relishing his victory.

An all-encompassing need to win seems to be one thing the "two Trumps" have in common.