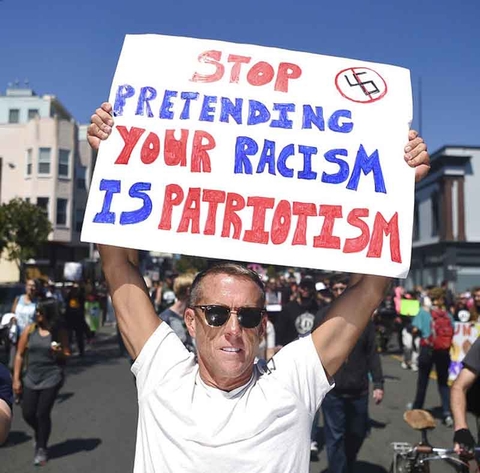 David Criswell holds up a sign as he marches with protesters in San Francisco. AP Photo, Josh Edelson.

San Francisco (AP) — The California city that birthed the American free speech movement is preparing for potential clashes even though the person behind a right-wing rally scheduled for Sunday has pleaded with supporters to stay away, saying that she fears violence.

The "No to Marxism in America" rally in downtown Berkeley comes a day after a controversial freedom rally planned by a right-wing group fizzled amid throngs of counter-protesters in San Francisco. San Francisco Mayor Ed Lee declared victory over a group he branded as inviting hate.

Both Amber Cummings and Patriot Prayer leader Joey Gibson have repeatedly denounced racism. Cummings canceled her Sunday event and Gibson called off his Saturday rally late Friday, saying that demonization by mayors in both cities and left-wing extremists made it impossible to speak out.

Cummings said she would be the sole attendee. In a message to the media Saturday she said she might be forced to cancel if she is not provided police protection.

It's uncertain if supporters— or opponents— will show up. The left-wing group By Any Means Necessary, which has been involved in violent confrontations, had vowed to shut down the rally at Civic Center Park. Berkeley Mayor Jesse Arreguin has urged counter-protesters to stay away. 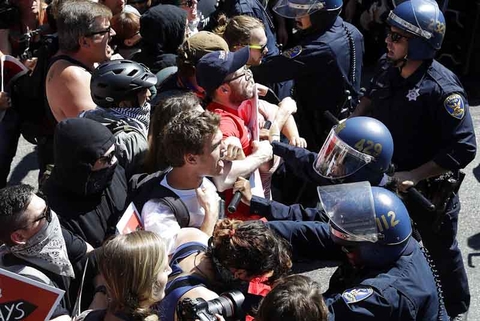 Berkeley police were planning for a number of contingencies, police spokeswoman Jenn Coats said in an email Saturday. The city has banned a long list of items from the park, including baseball bats, dogs and skateboards. People at the park are also not allowed to cover their faces with scarves or bandanas.

Cummings is a transgender woman and supporter of President Donald Trump who has said on social media and in media interviews that Marxism is the real evil and that members of the anti-fascist movement are terrorists.

"I'm not safe to walk down the road with an American flag in this county," she said to reporters in Berkeley last week, her face covered with a bandana to make a point about masked anti-fascist members.

Cummings called off her event in a lengthy statement issued via Facebook, saying that she had "grave concerns for the safety of the people attending my event."

Asked Saturday whether he had any plans to go to Berkeley, Gibson, the leader of Patriot Prayer, said he would "analyze the situation."

Gibson downgraded his Saturday rally into a news conference at a San Francisco park, but was thwarted when police swarmed the park and city workers erected a fence around it. He and several other people scheduled to speak at the rally were forced to travel to a suburb to hold their news conference.

Will Johnson, who is African American, said he is obviously not a white supremacist and was frustrated about the use of the term in connection with Patriot Prayer and the rally. "We're here in the middle of nowhere because we don't want the violence," he said.

The pivots by the group didn't deter more than 1,000 left-wing counter-protesters from descending on Alamo Square park, where they suspected right-wing supporters still might show up.

Student activism was born during the 1960s free-speech movement at Berkeley, when thousands of students at the university mobilized to demand that the school drop its ban on political activism.

However, the deadly confrontation in Charlottesville, Virginia, on Aug. 12 during a rally of white supremacists led San Francisco police and civil leaders to rethink their response to protests.