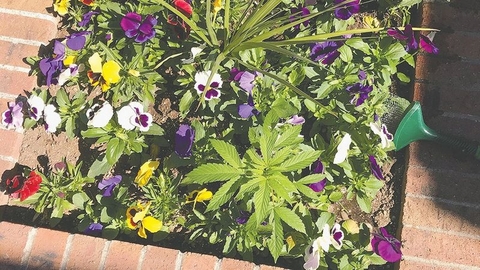 Some potted plants in the town of Powell, Wyoming have simply “gone to pot.” With a population of just over 6,000 people, the town is less than two hours east of Yellowstone National Park

Purportedly, a few of those 6,000 have been up to some sneaky tricks, according to the local paper, the Powell Tribune.

“Officials in Powell believe pranksters planted marijuana seeds in city-owned flower pots this spring, leading unsuspecting city workers to water and care for them,” reports the Tribune citing that the city Parks and Recreation staff noticed the unauthorized greenery late last month while watering the pots, including one not far from the police station.

Wyoming has very strict marijuana laws where cannabis is not even allowed for medical purposes. In fact, a 2015 law allows limited use of CBD oil.

But who planted the “weeds” in the city pots? Perhaps it was Mary Jane.

According to Police Chief Roy Eckerdt, the clandestine cultivating is "somebody's sense of humor." After learning about the pot in the pots, he reportedly checked the planters in front of the police station.

According to Parks and Recreation Superintendent, Del Barton, workers pulled two plants on June 29 and took them to police. Another was found a couple of days later. Barton says workers suspect there may be others.