When parents of same-sex couples refuse to attend their wedding, this mom steps in 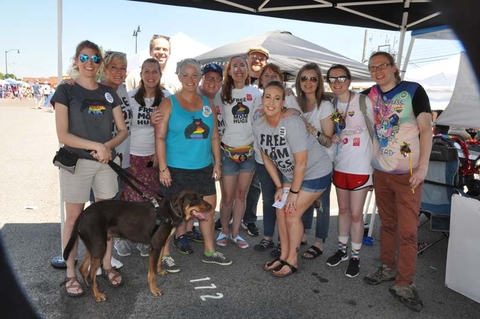 (CNN) -- Four years ago, when Sara Cunningham came home from a Pride festival in Oklahoma City, she was covered head to toe in glitter. She had spent the day offering free mom hugs or high-fives ("Not everybody's a hugger," she says) to passersby, and the love and joy she felt was palpable.

Unfortunately, so was something else.

READ: The mom who made it "cool to love your gay kid"

Cunningham's son is gay, and her experience at that festival led her and other ally mothers to form what is now "Free Mom Hugs," a nonprofit organization that offers mother-like support to LGBT youth.

In July 2018, that spark of support and celebration became a flame. Cunningham, frustrated with continued stories of parents rejecting their gay children, sometimes during the most important times in their lives, wrote a simple Facebook post.

"PSA. If you need a mom to attend your same sex wedding because your biological mom won't."Call me. I'm there. I'll be your biggest fan. I'll even bring the bubbles."

In a matter of days, the post went wildly viral. Cunningham knows exactly why.

"When people ask us about Free Mom Hugs, they usually say, 'How can I join,' 'What can I do," Cunningham says. "That's what made the post go viral. It was people all over the world saying, I want to do that, I can do that, I've been doing that,"

Since the post, Cunningham has been asked to attend several weddings, and the post sparked something of a movement -- one that ties back to the most important goal of Cunningham's work: Acceptance.

"Everyone needs acceptance," she says. "And when we fall in love, it's a profound, sacred special time of our lives. To not have the validation for recognition from your parents, from people who are so important to you, You may think you can handle it."

"But when it comes to the final blow," she continues, "To them saying, 'I'm not coming to your wedding,' it's just devastating. And I can't imagine hearing those words out of a mother's mouth."

Before, a difficult journey

Cunningham knows what kind of pain can come from not being accepted by your own family, because initially, she and her family struggled to come to terms with her son's sexuality.

It's a pain Cunningham is trying to relieve from other children, and their parents.

"We must learn to celebrate our LGBTQ children, or we will suffer with them," she says.

"My biggest regret is not celebrating him and what was important to him, earlier -- even during his high school years, and not being able to look past my own fears and my ignorance to see him."

She says the key for parents who are struggling is education -- and an open heart.

READ: When my teen came out to me

"There is so much information out there, so many ways to get educated, so many ways to learn [about LGBTQ issues]. To be honest, the only other choice is to remain in fear and ignorance. And I use those words respectfully, because I was there once."

And now, a new one of love

Honestly, Cunningham wishes Free Mom Hugs didn't exist. She wishes her presence at weddings, either as a stand-in mom or an officiant (she got ordained in 2016 to officiate the same-sex wedding of two friends), wasn't necessary.

"I hope some day that our organization won't be in existence anymore, that we can help change the social norm," she says.

And to all of those people who commented or shared her viral post, she has two words of advice: Show up.

"That's the key," she says. "Just show up. And when I say showing up, I mean we as parents, as friends or allies. I'm not the first mom to offer free mom hugs or attend weddings as a stand-in. But when we show up for any group that's marginalized, that's how we can make sure they really know they are loved and celebrated."