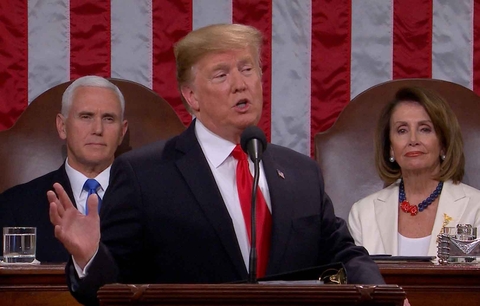 President Donald Trump delivered his 2019 State of the Union address on Tuesday. CNN/Pool.

In President Donald Trump’s long State of the Union address Tuesday night, the president appeared to offer hope toward an end to the HIV/AIDS epidemic.

He said, “In recent years we have made remarkable progress in the fight against HIV and AIDS. Scientific breakthroughs have brought a once-distant dream within reach. My budget will ask Democrats and Republicans to make the needed commitment to eliminate the HIV epidemic in the United States within 10 years. Together, we will defeat AIDS in America.”

To support the president’s goal, Dr. Robert R. Redfield, Director of the Centers for Disease Control and Prevention, issued an optimistic statement, saying, "The Administration’s plan will deploy the people and key prevention and treatment strategies needed to reduce new HIV infections by 75 percent over the next 5 years, with the hope of a 90 percent reduction within 10 years.”

But he added that, “"We have the tools to end new HIV infections in this Nation, but they must be applied now. The most recent data suggest that progress in reducing new infections has plateaued, and many communities remain vulnerable to HIV infection.

Redfield said that under this proposed initiative, the CDC will focus on four key strategies to meet the needs of communities with the highest HIV burden. These key strategies are diagnose, treat, protect and respond.

The Democratic National Committee (DNC) in a statement called it a “notable goal to end HIV/AIDS transmissions by 2030. But it also noted that “the Trump administration has consistently undermined advancements in HIV/AIDS research, attacked people living with HIV/AIDS and sabotaged access to quality health care at every opportunity.

Here’s Trump’s real record on HIV/AIDS, according to the DNC:

* Trump celebrated a court ruling in favor of a lawsuit he backed to overturn the ACA, endangering coverage for around 130 million people with pre-existing conditions, including HIV/AIDS. Without the ACA, insurers would no longer be required to cover those conditions.

“To put it simply, the ACA was a ‘watershed moment in the [HIV] epidemic’s history,’” according to the Kaiser Family Foundation’s director of global health and HIV policy, Jennifer Kates. “The law was designed to get more people access to health care, including those who were traditionally denied coverage because of ‘preexisting conditions’ like HIV….”

The Department of Health and Human Services proposed new rules to eliminate requirements that insurance plans for Medicare beneficiaries cover prescription drugs in “protected classes,” such as HIV/AIDS.

* The Department of Health and Human Services redirected money from the Ryan White HIV/AIDS Program to help fund the separation of immigrant families.

* Both of Trump’s budget proposals sought to cut global HIV/AIDS funding by over $1 billion, which could cause 300,000 deaths per year. “Trump’s 2018 budget not only slashes PEPFAR by 17 percent—from $4.6 billion to $3.8 billion—it cuts global health programs overall by $2 billion,” according to CBS News.

* United States Secretary of Health and Human Services  Alex Azar created a "Conscience and Religious Freedom Division giving health care providers the ability to refuse treatment to LGBTQ people if they have a "moral objection.”

HHS was following a 2017 executive order by President Trump directing agencies to expand religious freedom protections in ways that could increase discrimination against LGBT individuals and same-sex couples.”

* Trump’s Department of Defense instituted a “Deploy or Get Out policy, which would remove HIV+ military personnel from service solely because of their status. If military service members test positive for HIV, they can be discharged if they aren’t eligible for worldwide deployment.

CDC Director Redfield expanded on the actions the agency intends to take, listing them as "Diagnose new HIV infections; treat those with infection rapidly and effectively; protect people from being infected through access to comprehensive prevention and treatment, including medications that can prevent infection; and respond quickly to and stop new outbreaks.

“To accomplish this, we will accelerate our work with state and local health departments. We will establish HIV elimination teams—for ‘boots-on-the-ground’ support—to ensure communities with the greatest burden make progress. We will listen to people living with HIV, and to public health partners in the most-affected communities, so we reach those in greatest need,"

Democrats and LGBTQ and HIV/AIDS activists hope that the president intends to follow through on his words in Tuesday’s address. It is clear that CDC intends to push this program forward. But talking about it and actually following through with the resources to accomplish the goal are two different things. The DNC remains doubtful, given the actions of Trump’s administration in the last two years.