Africa is doing better on LGBTQ rights than you think 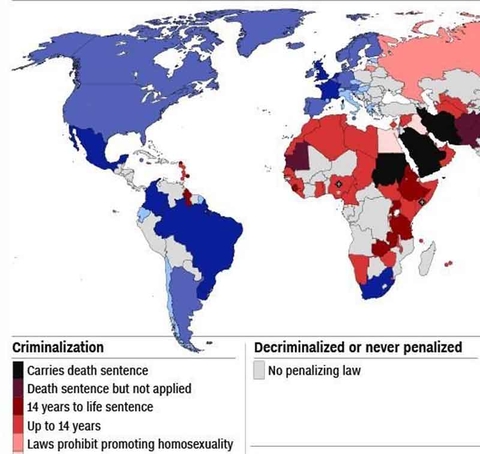 A look at Africa and the America's on LGBTQ rights. CNN graphic.

Botswana's High Court ruled for LGBTQI rights in the southern African country on Tuesday -- another historic decision in favor of equality, diversity and dignity.

The judges struck down section 164 of the country's penal code, which had stipulated seven years in prison for what it called "carnal knowledge of any person against the order of nature."

The court unanimously ruled that the legislation was discriminatory, unconstitutional and against the public interest.

And let's face it, it is a huge victory -- especially after last month's let-down in Kenya, where the courts failed to decriminalize their own colonial-era anti-gay sex laws.

Of course, there are those who will respond to Botswana's landmark ruling with confusion, and rage about the so-called 'scourge of homosexuality' sweeping across Africa.

When you ask these people what angers them so, they usually respond with something like, 'It is not in our culture as Africans.'

This statement has always been ridiculous, long before today's ruling.

This is not only because so many of our homophobic laws were in fact a poisonous gift from our British and Portugese colonial masters, but also because people are remarkably unaware that many African countries are not in fact homophobic by law.

Take the past three decades, for instance. Progress has been too slow for comfort, yes, but taken as an arc of history, after the initial 10-year lull between South Africa affirming the rights of LGBTQ people in 1994 (formally adopting it in 1996) and Cape Verde doing the same in 2004, the pace has noticeably quickened.

In 2015, Mozambique, which -- to its credit -- had never really enforced the law or harassed citizens, cast aside an evil colonial legacy from Portugal and decriminalized homosexuality (previously termed in the old code "vices against nature"), while also making same-sex relations legal.

In 2016, Seychelles followed suit. Keeping a promise made to the United Nations Human Rights Council in 2011, the country (which had never actually proscribed sex between women) decriminalized sex between men, striking down the 60-year old section of its penal code that stipulated up to 14 years in prison.

West Africa's Guinea Bissau is a remarkable case, and one where progress came quite early.

In the country's Creole language, there are no gender pronoun differences, and homosexual (and trans) people have lived very open public lives for a long time. This is a small country surrounded by homophobic nations including Guinea, Gambia and Senegal, but homosexuality has never been illegal here since the adoption of its penal code in 1993.

In 2008, in fact, it was one of the 66 countries to sign a Statement on Human Rights, Sexual Orientation and Gender Identity on the sidelines of the United Nations General Assembly.

And just this year, there was Angola. Its "vices against nature" law was done away with by a new penal code, another African country freeing itself from the policies inherited from its colonial masters.

Then its leaders went further, actively prohibiting discrimination against anyone due to their sexual orientation. It's also important to note that there had been no known prosecutions under the anti-gay law, according to the Human Rights Watch.

All of this huge progress stands aside from the fact that consensual homosexual activity had never been criminalized in many countries in the first place -- Burkina Faso, the Republic of Congo and the Democratic Republic of Congo, Ivory Coast, the Central African Republic, Djibouti, Equatorial Guinea, Gabon, Madagascar, Mali, Niger and Rwanda.

However the absence of a law does not mean that some LGBTQ individuals have not been detained in the past in some of these countries.

How is that for 'African culture'?

Of course, there is no doubt that we are a long way from freedom, with 31 countries still in the throes of legalized prejudice.

Attitudes towards homosexuality remain broadly negative across the continent and, currently, South Africa is the only African country in which same-sex marriage is legal. Africa is still the world's worst continent for sexual minorities.

Yet the trends over the past two decades have been clear, from the African Commission on Human and People's Rights adopting a resolution condemning violence against LGBT people in 2014, to court decisions in Botswana, Kenya, Uganda and Zambia that ruled in favor of LGBTQ activists -- including the registration of organizations, and the free speech of advocates.

With Botswana's ruling this week, we stand at the brink of even more progress.

Countries like Uganda and -- very sadly -- my country Nigeria, are reacting against reality with pernicious legislation and a tone-deaf law enforcement apparatus, and resolutely locating themselves on the wrong side of the universe's moral arc.

I have said before that my country should be ashamed of itself for continuing to treat its own citizens as less than human. Now, as Botswana becomes the latest African nation to embrace the future, our refusal to choose compassion over prejudice and love over hate stares us starkly in the face.

It is not a pretty picture.

Chude Jideonwo is the founder of Joy, Inc., which aims to equip young Africans with skills to build resilience and create happiness. Jideonwo is a Yale World Fellow and an Archbishop Desmond Tutu Fellow. He's the author of “Are we the Turning Point Generation?” and “How to Win Elections in Africa.”