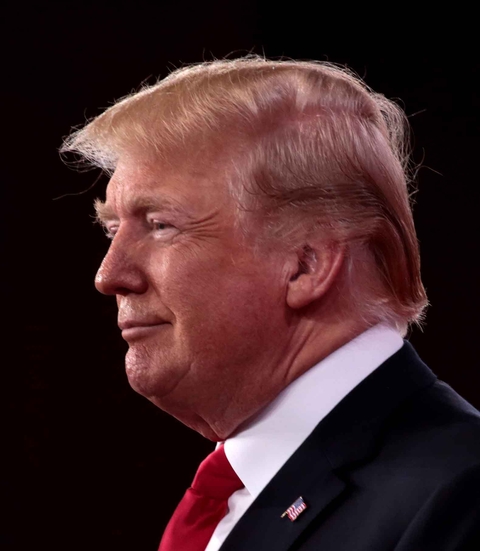 President Donald Trump just made a staggering offer to every foreign spy agency and American enemy: Have at the 2020 election -- especially if you have dirt that can help him win.

Even in a presidency that long ago burned through all conceivable superlatives, Trump's statement was a stunner.

This was more than a mere candidate calling on Russia to find Hillary Clinton's emails. It went further than dumping on US intelligence agencies by believing Russian President Vladimir Putin's smirking denials of election interference. Or Trump's claims that the Kremlin's 2016 interference caper is one big Democratic hoax.

This was the President of the United States -- the man charged with protecting the Constitution, American democracy and the Western world -- sitting at the Resolute desk in the Oval Office, saying he would accept damaging information from Russia and China on his 2020 opponent.

"I think you might want to listen. There's nothing wrong with listening," Trump told ABC News on Wednesday.

Anchor George Stephanopoulos brought up FBI Director Christopher Wray's warning that anyone who received incriminating information from a foreign power should call the bureau.

"The FBI director is wrong," Trump said, anger hardening his voice. He denied that interfering in American elections -- as Russia did in 2016 to help him win -- is even a problem.

Then again, Trump had said moments earlier: "I don't think in my whole life I've ever called the FBI."

The immediate political effect of Trump's interview was to fan more Democratic calls for the President's impeachment -- and to make House Speaker Nancy Pelosi's life more difficult. "It is past sad. It is past frustration. This is criminal. It is criminal. And we need to hold this president accountable," Democratic Rep. Brenda Lawrence, D-Michigan, told CNN's Erin Burnett.

"I feel we have to begin that process," said Lawrence, one of a growing minority of Democratic House members urging more robust action against Trump, referring to impeachment.

It would not be farfetched to argue that the President's remarks in themselves might end up as part of an impeachment case if things ever get that far.

The Democratic Party's 2020 presidential candidates competed with one another to hit the impeachment talking point -- suggesting the growing power of the argument even though the Russia investigation is not a dominant 2020 issue.

"The #MuellerReport made it clear: A foreign government attacked our 2016 elections to support Trump, Trump welcomed that help, and Trump obstructed the investigation," Sen. Elizabeth Warren, D-Massachusetts, tweeted.

Sen. Bernie Sanders of Vermont said he was not shocked since he believed that Trump does not respect the Constitution.

And Sen. Kamala Harris of California -- the state's former attorney general -- tweeted: "China is listening. Russia is listening. North Korea is listening. Let's speak the truth: this president is a national security threat."

But the political consequences of Trump's statements on Wednesday may pale in comparison with the intelligence and national security problems they will seed.

The President did not just risk the integrity of the 2020 vote, he reinforced the already strong impression that he would do anything it takes -- anything -- to win. Since he has the power of the presidency, that's a troubling thought.

Given that reality, any foreign entity that helps him in 2020 might expect all kinds of unspecified accommodations in policy or otherwise -- one reason why Trump's private meetings with Putin so trouble his opponents.

If he takes dirt from a foreign power, the President could then place himself in a dangerous, compromised position.

While US intelligence agencies -- and even the White House -- say they are doing everything they can to protect the election, the most powerful man in the world is signaling he doesn't care and would be willing to undermine those efforts.

And it may not even matter if any dirt gleaned on his opponents is true, since the Russian effort in 2016 showed that rumor and misinformation can be just as powerful as genuine information.

Trump's swipe at Wray will also spark new speculation about the position of the President's second FBI director.

But will it even matter?

The lesson of Trump's two-plus years in power is that convention-shattering comments like these will do nothing to crumble the rigid GOP base of support that sustains his presidency.

On the evidence of past kerfuffles, Republican senators can be expected to dodge and hedge. Conservative pundits will deny he did anything wrong. And his White House may accuse journalists of taking him out of context or deny the evidence on tape that the President said it at all.

Every Trump-engineered outrage ends the same way, with his critics fulminating and the President untouched and unrepentant, reinforcing his brand as a flamethrower torching the structures of Washington governance, as he promised his fans he would.

Trump knows what he's doing. He makes such incendiary statements well aware that they will unleash a media storm that will explode heads in Washington, further divide the nation and agitate the political base he needs to turn out in droves in 2020.

By now, it's almost as if Trump is intent on demonstrating that in the turbulent political era he spawned there are no enforceable standards of minimally acceptable public conduct. That his power cannot be constrained and reality is what he says it is. Yet another presidential constraint obliterated, and a new outrage will be along soon.

The cost to democracy

That is not to say there will not be reverberations from the President's interview. In the real world, there will be political, practical and intelligence implications.

After all, he's inviting anyone to play in the process that ultimately underscores American democracy. If elections have no integrity, the public's faith in those to whom it grants power cannot be guaranteed and the system will be in severe jeopardy.

Trump's comments represented a particular repudiation of special counsel Robert Mueller, who even in his taciturn way made an impassioned plea for Americans to protect their democracy.

On the first page of the Mueller report, the special counsel writes that Russia interfered in the 2016 election in "a sweeping and systematic fashion."

At the end of his news conference last month, Mueller strove again to get his message across with the final act of his assignment: "There were multiple, systematic efforts to interfere in our election. And that allegation deserves the attention of every American."

Trump delivered his response on Wednesday, taking issue with the central pillar of Mueller's case -- effectively arguing that the targeting of an opponent by a foreign espionage operation is acceptable.

Adding insult to injury, the President also flagrantly misrepresented Mueller's account of multiple meetings between his team and Russians in the 2016 campaign: "In fact, it said we actually rebuffed your friends from Russia; that we actually pushed them back -- we rebuffed them."

Mueller did not find a conspiracy between the Trump team and Russia. But he wrote in the report that "the campaign expected it would benefit electorally from information stolen and released through Russian efforts."

The ultimate question posed by the special counsel's parting warning and Trump's response is whether Mueller's plea will resonate, or whether another presidential restraint will dissolve in plain sight.