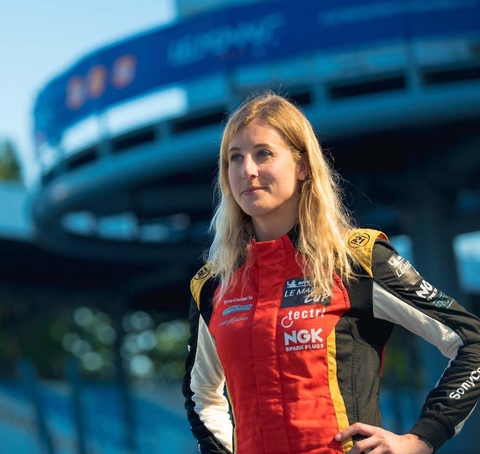 Charlie Martin is aiming to become the first transgender driver to race at Le Mans. Photo by Paola Depalmas.

Standing amid the fevered atmosphere of the Le Mans 24 Hour race, Charlie Martin had an epiphany.

One day they wanted to race at the iconic French cathedral of motorsport -- home to the world's oldest endurance race that takes place again this weekend -- instead of watching rain-soaked from the sidelines.

But this dream was secondary to another, more urgent desire that beat inside his body like a pulse.

If they raced it would be as a woman.

"Back then I wasn't even racing," Martin explained to CNN Sport. "But if you could have granted me any wish -- apart from changing my gender which was always the default answer -- it would have been to race at Le Mans.

"It is such a festival for petrol-heads and I came away spellbound; it was everything, the feat of endurance, what the cars go through, the scale of it in front of 300,000 fans.

"Scared of the consequences"

Martin had not yet began her transition during subsequent trips to Le Mans as an inspired spectator but in 2012 -- just over a decade since that first life-changing pilgrimage to the 24 Heures -- she transitioned, reassigning her gender to female. Martin underwent several major procedures as well as therapy and documented her journey on YouTube.

"Pretty much every fiber of my body told me it was the thing I needed to do," Martin explains. "But I always said to myself that I'd never have the courage to do it; I'm too scared of the consequences; I'm too scared of telling everyone in my life and how they might react and treat me.

"So to go into transition and not only do it but have it go incredibly well, to be so happy, finally, suddenly feels like you've taken the biggest risk in your life but you've also hit the jackpot."

When she transitioned, however, Martin turned her back on racing because she thought she wouldn't be welcomed as a transgender driver.

She had been competing in the UK in hill climb racing -- where drivers go against the clock on uphill courses -- fitting it in around her day job in the family engineering business.

"I walked away from motorsport," she explains. "I just couldn't see how it would ever be accepted.

"When I was in the first year of transition in the UK, people were quite standoffish but I think that was because everybody knew me and ... hill climbing in the UK is a slightly older generation thing -- and so that felt quite, I don't know. Challenging is probably the best way to describe it."

A decision to go to France and compete in a one-off round of the French Hill Climbing Championship in St-Goueno renewed Martin's passion and her hopes of becoming a professional racing driver. She had broken the class record and won the race by three seconds, a positively monumental margin by hill climb standards.

"People were a bit surprised that this English girl who no one had heard of had come over and blown everyone away," Martin recalls with a smile.

Having the courage to undergo transition -- and re-mortgaging her house to finance facial feminization surgery at the end of 2013 -- ultimately galvanized Martin's self-belief and, in turn, made her a better racer.

"It opened up a whole new life," Martin adds. "It started this whole process of taking risks, giving things a go and not worrying about getting it wrong and that snowballed and brought me to this point now -- Le Mans, let's go for it!"

In 2019, after more concentrated spells in hill climbing in Europe and a single season circuit racing season back in the UK, Martin quit her job and announced a campaign with the Racing Experience team to take part in the Michelin Le Mans Cup, a series for prototype Le Mans cars that would take her to the famous La Sarthe course this June.

But Martin's Le Mans date with destiny was suddenly snatched away when the funding she needed fell through just two weeks before this weekend's race.

"It's a real shame," says Martin, whose place in the team has been filled for the Le Mans weekend only. "Unfortunately because of last-minute delays with sponsorship we couldn't continue.

"We tried everything we could, including a crowd-funding campaign, but we were let down too close to the race itself."

Martin is resilient and positive. She has to believe that this is just a minor bump in her road to Le Mans.

And she can take comfort in the fact that she has always been working towards a three-year plan with the ultimate aim to compete in the 24 Hour race in 2021 as its first transgender driver.

"My goal remains to compete in the main 24 Hours of Le Mans and I feel even more determined than ever to make it happen," she adds.

"There's never been a professional trans driver in motorsport, so it's an exciting position to be in.

"First and foremost I just want to do the race but there is a huge significance for me to do that as the person that I am today, to do Le Mans as a trans woman.

"There is so much negativity bandied around in the media that we need real positive stories from real trans people doing incredible things with their lives."

This year the debate over transgender athletes competing in women's sport has hit the headlines.

As a high-profile transgender athlete, Martin was drawn into the debate, appearing on national television in the UK.

"When you have respected voices in sport like Sharon Davies and Martina Navratilova sounding off and shooting from the hip, when actually they're not familiar with the research, it's incredibly damaging," Martin says.

"It creates a very toxic environment for the trans community."

The International Olympic Committee (IOC) guidelines says trans women must show that their testosterone level has been below a certain level for at least 12 months before their first competition.

Martin approves of the IOC ruling, least of all because it silences those that argue trans women competing in female competitions have an unfair advantage because of increased levels of the male hormone.

"If you've had testosterone in your body your whole life and you take it away and replace it with oestrogen you lose physical strength, you lose muscle mass and you get weaker. I know I have."

Martin acknowledges that being in motorsport -- where a machine provides the bulk of the muscle -- has protected her from some, but not all, of the negativity.

"It removes the possibility for somebody to argue against me and says 'oh well you're only doing so well because you're trans and you have a physical advantage'. So it simplifies things from my point of view but it can still be challenging," she says.

"It's an unfortunate part of being open about my life that I face a lot of transphobic abuse. There'll always be a lot of abuse online (but) I've learned to ignore it.

"The only underhand transphobia I experienced within the sport was a few years ago when I was left out of a national squad for a racing championship after my transition, despite having the most experience of all the potential candidates.

"In general, I've found that the motorsport community has been incredibly supportive of my decision to be my true self."

Looking back on her journey, Martin realizes how far she has come from that first transformative weekend watching the 24 Heures in 2001.

"Even the idea of doing Le Mans full-stop back then seemed highly improbably but if you said transitioning and doing it as a trans woman, I'd have just laughed," she says with another big smile.

"So to be at a point where that feels not only possible but that it is going to happen -- it's just huge."

Martin is perfectly qualified for Le Mans, after all it's about endurance and she has that in spades.