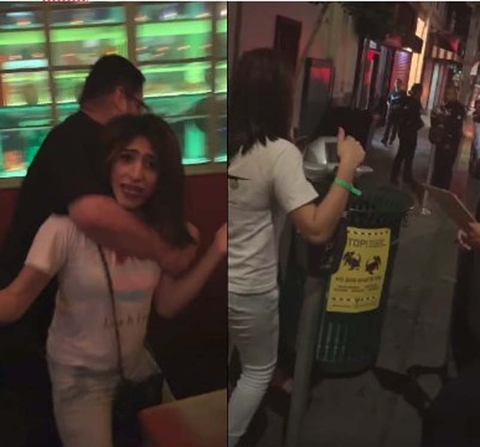 In LA, transgender women were forcefully removed from a bar. Photo by Khloe Perez-Rios via CNN.

The Los Angeles Police Department is investigating an incident recorded on video and widely shared on social media that shows security staff forcefully removing transgender patrons from a downtown bar on Friday.

A group of eight employees from Bienestar Human Services, which focuses on health issues in Latino and LGBTQ communities, were celebrating at Las Perlas bar after the first day of a local LGBTQ festival when a couple began directing "transphobic slurs" at their table, Khloe Rios told CNN.

Rios is the manager of Transgeneros Unidas, the Bienestar team focused on advocacy for transgender and non-binary people.

Rios said that at first, she and her group, which included transgender women of color, gay men of color and a gender non-conforming person, told the couple to leave them alone. The two seemed drunk, Rios said, so her group didn't take them very seriously.

Then, Rios said, the man became physically aggressive toward one of her coworkers. She said her group immediately tried to protect their coworker from being harmed.

"We just wanted to protect each other," Rios said. "We were trying to get them off our backs. We didn't want no confrontation but they were being very violent."

Rios said the bar's manager and security personnel soon arrived and tried to de-escalate the situation. She said they asked the couple to leave and started "gently" escorting them outside, but handled her group forcefully.

In the video recorded by Rios that went viral, one person is seen repeatedly screaming, "Don't touch me like that," as they are forcibly grabbed by bar security, slammed against a wall and thrown out.

Another security staff member is seen grabbing another individual in a chokehold, dragging them across the bar, and also throwing them out.

"What happened?" the individual being dragged outside can be heard asking.

Cedd Moses, CEO of Pouring with Heart, the hospitality group that owns Las Perlas Bar, said in a statement that the manager on duty asked two groups of guests to leave after an "escalated verbal altercation broke out." He added that the company has "zero tolerance for this type of behavior."

"The guards removed the guests that were not compliant with the manager's request to leave and did so in accordance with company policy," the statement read.

Rios said her group wasn't asked to leave until they were already being escorted out.

"They ask the husband to take the wife to go outside, and they just turn to us and start picking up," she said. "They never asked us to leave. They asked us to leave when we were being pushed out."

Rios said that police eventually arrived at the scene, but that the other couple involved in the incident had fled by then. She said her group filed a hate crime incident report with law enforcement.

"Whether in public, or inside of a private establishment, all Angelenos deserve the freedom to coexist in harmony," the department said in a tweet on Saturday.

Dozens of people protested outside the bar on Saturday evening, chanting "No justice, no peace" and "Trans lives matter." Others online urged a boycott of the bar.

Moses called the incident "rare and unfortunate" and added that Las Perlas would donate all profits from this weekend to Bienestar Human Services.