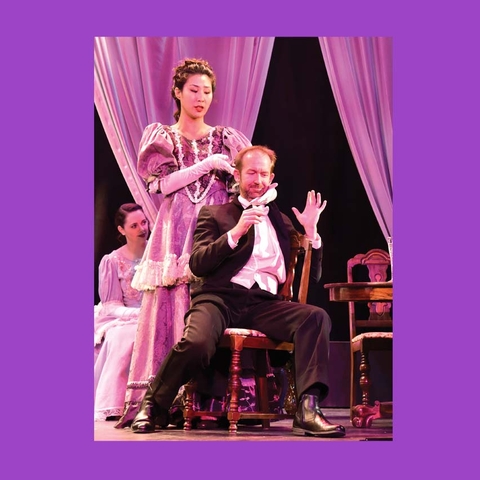 Painted Sky Opera begins its fourth season with performances of The Barber of Seville this September at the Freede Little Theatre at Oklahoma City’s Civic Center Music Hall.

This comic gem is a staple of opera houses around the world due to its playful and popular melodies and its colorful characters.

Painted Sky Opera's production will be Mary Beth Nelson’s first performance in Oklahoma City since graduating from Oklahoma City University. She will play the lead role of Rosina.

Nelson made waves in the national operatic world recently for her portrayal as Supreme Court Justice Ruth Bader Ginsburg in the opera Scalia/Ginsburg.

The Barber of Seville details the efforts of Rosina to free herself from the stifling oversight of her guardian, Bartolo, and join with Count Almaviva, who has fallen in love with her from afar.

The Count employs the help of the local barber, Figaro, whose resourcefulness and creativity help the Count meet with Rosina by employing methods including early morning serenades and clever disguises. The intrigue and mischief lead to some of the funniest and well-known scenes in all of opera.

“The Barber of Seville is popular in the United States partially because of the Bugs Bunny cartoon The Rabbit of Seville, which depicts the wily rabbit shaving Elmer Fudd’s face and head accompanied by music from the opera,” said director Rob Glaubitz.

“That scene is based on an actual scene in The Barber of Seville, which features Figaro shaving Bartolo. The scene in the actual opera is equally hilarious as the cartoon, albeit with more restrictions due to the laws of physics.”

Another well-known moment from the opera is Figaro’s famous entrance aria, Largo al factotum, in which he introduces himself by describing the overwhelming desire for his many services by the residents of Seville.

“Figaro’s Largo is one of the exciting moments in all of opera, and it makes my heart beat a little faster every time I experience it,” said Glaubitz. “What most people don’t realize is that all of the music in The Barber of Seville is filled with the same energy and personality, even if it is less familiar to them.”

“I love featuring Oklahoma performers whenever possible,” explains Glaubitz. “Fortunately, the immense talent in the area makes that easy.”

Glaubitz directs the show for the stage with music direction by Jan McDaniel.

Painted Sky Opera will perform The Barber of Seville with orchestra in Italian with English supertitles. Performances are at 7:30 p.m. September 20 and 27 with a 2 p.m. matinee’ on September 22 at the Freede Little Theatre at Civic Center Music Hall.

Tickets start at $35 for adults, with discounts for students, military, and seniors available in-person at the box office.  Purchase advance tickets online at www.paintedskyopera.org or by visiting or calling the Civic Center box office at (405) 594-8300.

For more information about The Barber of Seville or Painted Sky Opera’s 2018-19 season, visit www.paintedskyopera.org.