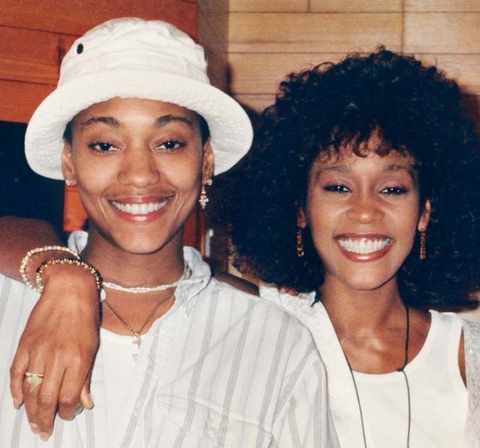 It feels as if everybody's got something to say about Whitney Houston, the pop star and actress who died in 2012 at 48.

Her mother, Cissy Houston, wrote a book in 2013, detailing her loss. Her friend, BeBe Winans, wrote a book titled "The Whitney I Knew." Her producer, Narada Michael Walden, wrote a book about what it was like to work with her. Michael Essany, Kevin Ammons and Pat Houston have also published books about an icon who was as loved by countless angels as she was haunted by relentless demons.

Hell, in a span of 10 months, two documentaries about Houston were released (in 2017 and 2018). At this point you would think any new work about her might not be a big deal. And yet one couldn't help but note the visceral response to the news of Robyn Crawford's new memoir, due out next week, "A Song for You: My Life with Whitney Houston."

For years there were rumors that Crawford was more than Houston's personal assistant earlier in the star's career, and she is featured in the two documentaries about Houston, even though she declined to sit down for interviews for both films. In her new book, Crawford confirms those suspicions. Before "The Bodyguard" and the Grammys, before the platinum records and tours, before Houston signed a contract or even graduated from high school, Houston and Crawford were, according to Crawford, just a couple of kids from New Jersey in love.

Now, had one of them been male, that relationship would not have been a secret to be kept any more than the one between Britney Spears and Justin Timberlake back then, or Selena Gomez and Justin Bieber. But according to Crawford, Houston broke off the physical aspect of their relationship for fear it could derail her budding career.

Remember this was the 1980s. The popular ABC show "thirtysomething" lost advertising for showing two men in bed. AIDS was referred to as gay cancer. In fact, the actor Rock Hudson died from complications of the disease in 1985, the same year Houston's debut album was released.

Crawford is telling us Houston didn't break off physical intimacy because she no longer loved Crawford; she broke things off because one of the most gifted vocalists in history was afraid we wouldn't love her if we knew the truth.

Let her "rest in peace" is the outcry from Houston's fans. This ignores the fact that homophobia didn't allow Crawford and Houston to live in peace. And here we are today, decades after a decision was made to hide for the sake of Houston's career, Crawford says, and the Supreme Court is trying to decide if civil rights law protects LGBTQ people from discrimination in employment. Crawford should not be ashamed for writing a book sharing her relationship with Houston. This country should be ashamed that we're still trying to decide if a person's sexual orientation should affect their career.

Crawford and I worked together for years at ESPN The Magazine, which is where she ended up not long after leaving Houston's employ in 2000. Her desk was near mine, and we initially bonded over our love of basketball and music. We became friends because she is a beautiful person with a generous heart and gentle soul.

In all of our years, she never gossiped to me or anyone in our work circle about her relationship with Houston—and yeah, I'm embarrassed to say it, but we did ask. Crawford was too classy and protective of her lifelong friend to play along with our childish games. Crawford would only express concern and love for Houston, who, at this point, was known more for her drug addiction and volatile marriage to Bobby Brown than being on the charts.

Occasionally she would tell me that Houston had called and they would chat about her well-being, but again, she kept conversations about her time with Houston restricted to what their relationship was in that moment, not what it had once been. I respected her privacy even as I could see the heartache and sometimes tears in her eyes.

The person she had met when the two were just a pair of teenage camp counselors was on a downward spiral and there was nothing she could do to pull her out.

From a distance I couldn't help but wonder how different Houston's life would have been if only those around the singer had embraced Crawford instead of pushing her away. During an interview in 2013 with Oprah Winfrey to promote her book, Cissy Houston didn't hesitate to share her feelings about their friendship.

Winfrey: Would it have bothered you if your daughter Whitney was gay?

Winfrey: It would have bothered you?

Winfrey: You would not have liked that?

Houston: Not at all.

It angers me to see critics characterize Crawford as an opportunist out to make a buck by "soiling" Houston's name. Houston's mother is allowed to go on TV and share her truth but Crawford is supposed to live in silence, even as books and movies are made evoking her name, using her image and condemning her very being?

First of all, there is nothing wrong with being LGBTQ, so this narrative that Crawford is soiling Houston's name is just homophobia minus the blatant slurs. Second, if my friend wanted to use her ties to Houston to make money, she would have done so when she stopped working for her, instead of taking a job working in an office building.

Third—and this is very important—she loved Whitney Houston. Not as a fan, or groupie, or meal ticket but as a person. And because of that, she has every right to talk about her life with her as much as anyone else who claims to have known and loved her. Why? Because that's her truth. And if Cissy Houston can go on TV and proudly proclaim her homophobia, Crawford can go on TV and share how homophobia broke her heart.

Editor's note: LZ Granderson is a journalist and political analyst. He was a fellow at the Institute of Politics at the University of Chicago and the Hechinger Institute at Columbia University. He is the sports and culture columnist for the Los Angeles Times and co-host of ESPN LA 710's "Mornings With Keyshawn, LZ and Travis."