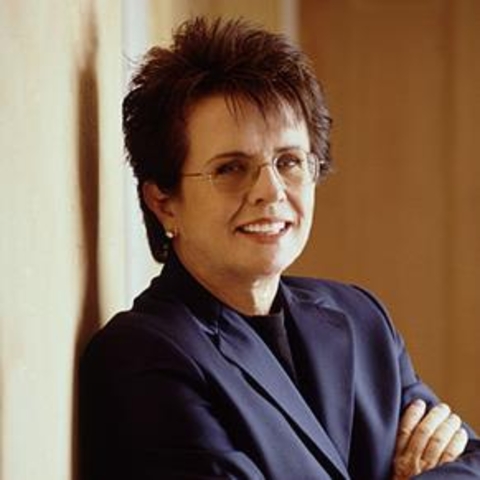 Openly gay tennis great Billie Jean King said "It took about 10 seconds," to decide to represent the US at the Sochi Olympics. File photo.

Billie Jean King believes standing up to discrimination is the best way to combat it, so she had no hesitation joining the U.S. delegation for the Sochi Olympics.

King will help lead the delegation in the opening ceremony Feb. 7 at the Sochi Games, which has been overshadowed by a recent anti-gay law in Russia, calls for a boycott and criticism from human rights groups.

"It took about 10 seconds," King told The Associated Press on Wednesday about deciding to go to Sochi. "It sends a strong message that America is very diverse. We are here, and surrogates as athletes and gay athletes. We reflect part of America. Maybe we'll be a voice for people who don't feel they can be a voice yet."

King said she'll walk in the opening ceremony, attend ice hockey and figure skating events and meet U.S. athletes during her three-day visit to the games. The former tennis star said she'd like sexual orientation added to the list of protections in the IOC charter.

"I'm all excited about meeting different athletes and watching them do what they do," King told the AP in an exclusive phone interview from her home in New York. "The Olympics is foremost about the athletes coming together, and they have worked so hard for this moment to be representing their country and competing.

"That's the essence of what it's about."

There's the possibility of consequences if an athlete wears a rainbow pin or carries a rainbow flag in Sochi.

"I don't want any athlete getting in trouble, although I think they should do anything they want," she said. "Before I knew about Rule 50, I thought it would be sweet to wave some flags or something. But they can get in big trouble and have their medal taken away and also be sent home."

Rule 50 of the Olympic Charter for states: "No kind of demonstration or political, religious or racial propaganda is permitted in any Olympic sites, venues or other areas."

President Barack Obama has been publicly critical of the Russian anti-gay law and President Vladimir Putin's "cold-war" mentality on other issues. For the first time since 2000, the delegation to the Olympics will not include a president, former president, vice president or first lady.

The presidents of Germany and France are among leaders not traveling to the Olympics.

So King, a social justice trailblazer who won 39 Grand Slam titles in her tennis career, was tapped to enter the fray involving the delicate balance of Olympic sports and politics. Call it diplomacy through diversity.

She wants to have an impact as an openly gay person in Sochi.

"Maybe we'll help the LGBT community in Russia, I hope there will be a connection for them and help them not feel alone and disenfranchised," King said. "Personally, I hope it helps the movement take another step forward so people will realize we're just like everybody else. It should be a non-issue. It's just like people of color in our country and other places, it has to be a non-issue."

King is no stranger to the Obama administration. In 2009, she kissed the Medal of Freedom that Obama draped around her neck upon receiving the country's highest civilian honor. She's also a member of the President's Council on Fitness, Sports and Nutrition and involved with Michelle Obama's "Let's Move" campaign to reduce childhood obesity.

As an 18-year-old, King played tennis in Russia and returned several times throughout her career.

"The Russian people have always been so wonderful to me, personally," she said.

With King serving as Olympic coach, the U.S. women's tennis teams won gold in singles and doubles at the 2000 Sydney and 1996 Atlanta Games.

King said the WTA was criticized about women's rights issues a few years ago when it moved its championship to Doha, Qatar.

"I don't believe in boycotting. That's more reason to go," King said. "The only way you break down barriers is by being there and meeting people and getting these issues out on the table — doing it in an appropriate and diplomatic way."

Although the Russian government has given the IOC assurances about the safety and well-being of gay athletes and visitors during the Olympics, competitors will enter a twilight zone of mixed messages in Sochi. The Olympic Charter calls for no discrimination by participating countries; Russia says it will essentially put on hold the anti-gay law during the 18-day international event; and last month the IOC cited Rule 50 to remind athletes to refrain from political gestures.

Last week, Putin rescinded a ban on demonstrations in and around the Sochi Olympics and Paralympics. However, any approved demonstrations are expected to be restricted to "protest zones" far from Olympic venues.

Gay rights groups say the law encourages harassment and violence toward LGBT people in Russia. In 2012, the country banned adoption of Russian children by U.S. parents, and gay activists are concerned the ban will extend to the LGBT community after the games.

"I just think it's important that we're seen and we're out and we're free," King said. "I hope that I'll meet people, maybe in Russia, who are concerned and have discussions. There's nothing like meeting people in person and just listening to them and exchanging information and building relationships."

At 70, King is ready to take center stage again.