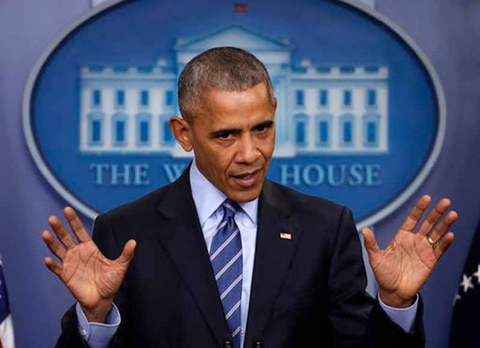 President Barack Obama says he won't express an opinion on whether electors should receive a briefing on Russian involvement in the U.S. election before they cast ballots at meetings across the country Monday.

He says, "It's the American people's job, not the electors' job to decide my successor."

Obama is speaking at his annual year-end news conference.

President Barack Obama says he's advised Donald Trump to "think it through" before making any changes to the "one-China" policy.

Trump has said he wouldn't feel bound by the decades-old policy in which the U.S. recognizes Taiwan as part of China.

The "one-China" policy became an issue after Trump broke decades of diplomatic protocol by having a telephone conversation with Taiwan's president.

Obama says he told Trump to have his full team in place and be fully briefed on issues before considering any changes.

Obama said at his year-end news conference that the Taiwan issue is of utmost importance to the Chinese, and how they react to any potential change could be very significant.

President Barack Obama is stopping short of saying President Vladimir Putin himself orchestrated the Russian hacking of U.S. political sites during the election. But he is confirming that it was done at the highest levels of the Kremlin.

Obama says not much happens in Russia without a nod from Putin. He says he will let the public decide whether there were rogue high-level Russian officials acting without Putin's knowledge.

Obama also says he wants to give the intelligence community a chance to issue a report on the hacking before the end of his administration. But he cautions that some information will be classified because disclosing it would divulge the way in which the U.S. has been able to collect the intelligence.

President Barack Obama is criticizing Republicans for warming to Russian President Vladimir Putin, saying, "Ronald Reagan would roll over in his grave."

He says Republicans are falling victim to efforts by Russia to weaken American democracy.

Obama is citing a new survey showing that more than one-third of Republicans view Putin favorability. That's up from just 10 percent in July 2014.

The president is speaking at his annual year-end press conference. Much of his appearance has been dedicated to discussing Russia's involvement in hacks of the Democratic National Committee and a top Clinton campaign staffer.

Obama sought help getting his doctor to come to the White House briefing room, where he was answering questions from reporters. At another point, he started telling people what doors to go through to get to the doctor's office.

Journalists and photographers — many of them dressed for the frigid weather — packed the rather small briefing room for Obama's final news conference of the year, rendering it stuffy and uncomfortable.

Reporters without assigned seats stood in the aisles, which is where the woman was when she began to feel ill.

Obama is accustomed to people passing out at his events around the country — just not in the White House briefing room.

President Barack Obama says the U.S. would've had to be "all in and willing to take over Syria" for him to intervene more forcefully in the country's civil war.

He says doing so wasn't feasible for many reasons. It would've required many U.S. troops; he lacked support from Congress and the right under international law; the U.S. already had costly deployments in Iraq and Afghanistan; Syria's opposition wasn't prepared to govern; and Russia and Iran were protecting Syria's government.

Obama says military options short of invasion were tempting because "we wanted to do something." But it was "impossible to do this on the cheap."

Obama says he asked himself if he could do something to save lives.

But he says his No. 1 priority was doing what was right for America.

Obama made the revelation during his year-end news conference at the White House. He offered no specifics about what the suggestions were.

Obama says Trump "has listened" to him. But he says he can't say with certainty whether Trump will follow his advice.

The president and Trump have spoken by telephone several times since they met in the Oval Office two days after election, and it's usually Trump who reveals that they've talked.

Obama says their telephone conversations are "cordial" and not "defensive in any way," given their deep disagreements on the issues.

President Barack Obama says he regrets not being able to transfer his own political success into Democratic races across the country.

The president is acknowledging the failures of his party — and himself — to build up a broad base of support during his tenure. He says the party must do a better job of reaching out to all voters, even in states and counties they are unlikely to win.

Obama says: "That's something I would have liked to have done more of but it's kind of hard to do when you're dealing with a whole bunch of issues here in the White House."

Democrats have lost more than 1,000 seats in Congress, state legislatures and governor's mansions during Obama's two-term.

Obama is speaking at his annual year-end news conference.

President Barack Obama says everyone should be concerned about the level of cyber hacking that renders governments, businesses and individuals vulnerable.

Speaking at his year-end news conference at the White House, Obama says Russian hacking during the election was not "some elaborate, complicated espionage scheme."

He says the unsophisticated nature of what transpired concerns him and "it should concern all of us."

Obama says the episode underscores the "constant challenge" the nation faces with hacking that happens every day.

President Barack Obama is defending how he's handled the hacking of political sites that took place before the November election.

He says at a White House news conference that his goal is to send a clear message to Russia that such intrusions won't be tolerated. But he's not saying what the U.S. response will be.

Obama says with the "hyperpartisan atmosphere" of the election, his main concern was the integrity of the election process. He says he wanted to make sure the U.S. public understood that the White House was trying to "play this thing straight."

He says he spoke with Russian President Vladimir Putin in September, and told him — in these words — to "cut it out."

The White House hasn't commented about what a U.S. response might entail. Options could include a retaliatory cyberstrike on Russian networks or sanctions targeting Putin's associates.

President Barack Obama says Syria, Russia and Iran have blood on their hands for what's happened in the Syrian city of Aleppo.

Obama says the world is "united in horror" at the assault on rebel-held areas of Aleppo.

Obama — at a White House news conference — is accusing the Syrian government and its two powerful allies of deliberately "surrounding, besieging and starving innocent civilians," and targeting aid workers and medical personnel. He says entire neighborhoods have been reduced to "rubble and dust."

The president also says civilians have been executed.

Obama acknowledges that Syria's almost 6-year civil war has been among the hardest issues he's faced. Despite his failure to stop the conflict, Obama isn't saying anything to suggest a change in U.S. strategy.

President Barack Obama is using his year-end news conference to boast about his administration's achievements.

Obama is citing a number of positive economic indicators such as a declining unemployment rate and higher rates of insured people under his health overhaul. And he's highlighting diplomatic achievements — among them, the reopening of relations with Cuba.

Obama says he's leaving the country "stronger and more prosperous than it was when we started." But he's reminding the public that there's more to be done on the country's biggest problems. He says he's going to continue working to push the agenda of his administration after leaving office.