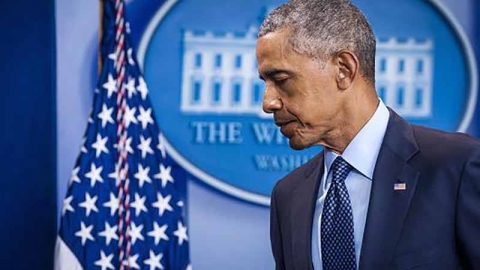 The President and Vice President visited a makeshift memorial at the Phillips Center, adjacent to City Hall, and laid bouquets of white flowers among the Mylar balloons and other flowers. President Obama spoke with the vice president at his side.

He said the city was "shaken by an evil, hateful act." But today, he said, "most of all, there is love."

He said of the families, "their grief is beyond description."

He and Vice Pres. Joe Biden told them, "Our hearts are broken, too. We stand with you."

The president said the U.S. will destroy ISIL, but that we also need to address gun violence.

"It's going to take more than our military," he said. "Our politics have conspired to make it as easy as possible for a terrorist...to buy extraordinary powerful weapons and they can do so legally."

Obama said he held grieving parents today, and "they don't care about politics. Neither do I. This debate needs to change...Those who defend the easy accessibility of assault weapons should meet these families.”

He continued, "It's a good time for us to reflect on how we treat each other. We have to end discrimination and violence against our brothers and sisters in the LGBT community..."

In his speech, Obama pointed out that the victims are themselves part of the American family, adding that the nation was inspired by the courage of those who risked their lives to save others in the attack.

“We're all going to have to work together, at every level of government, across political lines, to stop killers who want to terrorize. We will continue to be relentless,” he said, against terrorist groups.

"When you have lone-wolf attacks like this etched in the minds of a disturbed person, then we're going to have to take different kinds of steps in order to prevent" such slayings. "Those who were killed and injured here were gunned down by a single killer with a powerful assault weapon. The motives of this killer may have been different than the mass killers in Aurora, or Newtown. But the instruments of death were so similar. Now another 49 innocent people are dead. Another 53 are injured. Some are still fighting for their lives."

He admitted that the American people, law enforcement and the government itself cannot anticipate or catch “every single deranged person...but we can do something about the amount of damage that they do.”

He continued, saying the victims were “in places where kids are supposed to be...The notion that the answer to this tragedy would be to make sure that more people in a nightclub are similarly armed to the killer defies common sense.”

He said the gun rights advocates should explain "why it is they think our liberty requires these repeated tragedies,” because, "That's not the meaning of liberty."

On Senate action, he stated, “I hope that senators who voted no on background checks after Newtown have a change of heart. And then I hope the House does the right thing and helps to end the plague of violence that these weapons inflict on so many lives.”

"I truly hope that senators rise to the moment and do the right thing. we can stop some tragedies. We can save some lives. If we don't act, we will keep seeing more massacres like this."

The President and Vice President placed bouquets comprised of a total of 49 white roses, one in honor of each of the deceased victims. They spent about two hours with families. They then took off from Orlando.