Obama: Right to vote under threat in the US 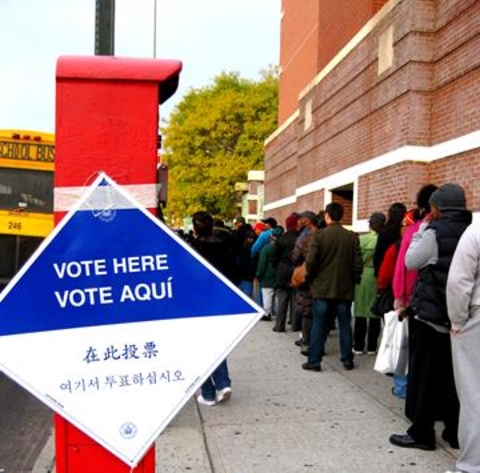 Long voting lines are one of the results of GOP efforts to suppress the votes of the young and minorities. Photo by April Sikorski / CC ASA 2.0.

New York (AP) — In an unsparing critique of Republicans, President Barack Obama on Friday said the GOP is threatening voting rights in America more than at any point since the passage of the historic 1965 law expanding rights at the ballot box to millions of black Americans and other minorities.

"The stark, simple truth is this: The right to vote is threatened today in a way that it has not been since the Voting Rights Act became law nearly five decades ago," Obama said in a fiery speech at civil rights activist and television talk host Al Sharpton's National Action Network conference.

The election-year warning comes as Obama seeks to mobilize Democratic voters to fight back against state voting requirements and early balloting restrictions that many in his party fear will curb turnout in November. The president vowed that he would not let the attacks on voting rights go unchallenged, but he offered no new announcements of specific actions his administration planned to take.

Obama's speech came a day after he marked the 50th anniversary of the Civil Rights Act at the LBJ Library in Austin, Texas, where he praised President Lyndon Johnson's understanding of presidential power and his use of it to create new opportunities for millions of Americans.

The president pinned efforts to curb access to the ballot box directly on the GOP, declaring that the effort "has not been led by both parties. It's been led by the Republican Party." Mocking the Republicans, he said, "What kind of political platform is that? Why would you make that a part of your agenda, preventing people from voting?"

For the remainder of the year, no political issue stands out more prominently for Democrats than their ability to motivate voters to turn out at the polls in November. Control of the Senate, now in the hands of Democrats, is at stake, as is Obama's already limited ability to push his agenda through Congress.

But traditionally weak midterm turnout by Democrats coupled with efforts in some states to limit early voting and to enact voter identification requirements have prompted the president and his party to raise alarms and step up their get-out-the-vote efforts.

Republicans have long argued that identification requirements and other voting controls are reasonable measures designed to safeguard the balloting process, not to suppress voter turnout. Democrats say photo identification requirements especially affect minority or low-income voters who may not drive and thus wouldn't have an official government ID.

"I want to be clear: I am not against reasonable attempts to secure the ballot. We understand that there has to be rules in place," Obama said. "But I am against requiring an ID that millions of Americans don't have. "

The North Carolina steps, which take effect in the 2016 election, came after the Supreme Court last June threw out the crucial section of the Voting Rights Act that required that all or parts of 15 states with a history of discrimination in voting, mainly in the South, get federal approval before changing their election laws.

Bipartisan legislation proposed in the House and Senate would attempt to address the constitutional concerns raised by the Supreme Court. But sponsors such as Sen. Pat Leahy, D-Vt., and Rep. James Sensenbrenner, R-Wis., are still trying to line up enough support for the proposals.

The proposed bill would require four states — Georgia, Louisiana, Mississippi and Texas —to get approval from the Justice Department before making any changes in the way they hold elections. In an effort to secure Republican votes, it provides an exception for states that want to adopt photo identification requirements.

Offering a potential compromise, former United Nations Ambassador Andrew Young, once a top aide to Martin Luther King Jr., suggested during his own remarks at the LBJ Library this week that Obama use his executive power to require optional photos on Social Security cards as a remedy for states that impose voter ID laws.

Meanwhile, the administration is stepping up its offensive. Attorney General Eric Holder has challenged the North Carolina election law as well as one in Texas.

Vice President Joe Biden added his weight to the issue this week with a video for the Democratic National Committee denouncing the voter restrictions.