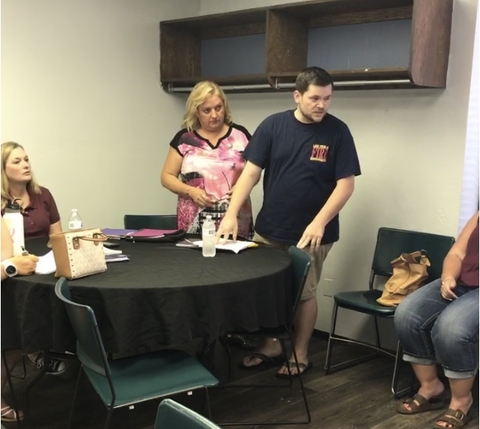 OKC Pride board members Alison Scott and Brandon Odom. Copyright The Gayly; may not use without permission.

With the events related to OKC Pride which have unfolded this week, remaining board members have come together to regroup the organization and move forward.

For the background stories on OKC Pride covered by The Gayly - information you won’t want to miss - click here: OKC Pride in turmoil; shocking information revealed.

In part, The Gayly reported on suspected improprieties and allegations of fraud by the President at the time, Lori Honeycutt. She had been operating the organization as the President and Treasurer, including being the only signature on the OKC Pride bank account with sole access to the information in the account.

Or so she thought.

Tonight's meeting began with Lana Story, current OKC Pride Vice President, resigning her executive position and requesting to be placed as a member at large. Using Robert’s Rule of Order for the meeting, Story’s request was approved.

Brandon Odom was voted in as Interim President who said, “The purpose of this meeting is to fill the current vacancies now on the board.”

New board members voted in as follows: Shenold, Vice President; Scott vacated her position as Secretary, voted in as Treasurer and Clark is Secretary.

“We just want to do things right,” said Scott. “We look at our Pride as our Stonewall.”

Odom began, “The next order of business would be to pass a resolution demanding all account access, electronic financial instruments, passwords and control of electronic and social media, be immediately turned over to the Interim President.

“I’m going to amend that personally, and I can reach out to anyone here who may put a nay against my nomination, that this be a shared/dual responsibility with the Secretary. Because I do not feel comfortable as the President of this organization if I do not have checks and balances on all of this.”

The motion was carried.

They then voted to approve all outstanding expenses owed by OKC Pride at this time.

The board took a break, then went into executive session to discuss issues about the alleged fraud reported to the Oklahoma City Police Department on July 12.

For nearly a year, Story was in the VP position, she said she had a tumultuous relationship with Honeycutt.

“When Brandon decided to leave, everything changed,” she said. “Then we were on the busy side of things for OKC Pride, but I had questions for Lori.

“When I asked her about who is Treasurer, I was told another board member was. I’ve only lived in OKC for barely two years, and Lori told me all the board members were her friends and she would have me voted off.”

Although she has nearly 20 years on Pride boards in other cities and she and Honeycutt co-chaired the festival together in 2017, Story said she felt Lori was very hostile, particularly when Story asked questions.

“Another person approached me just before Pride and let me know she had a past [criminal record]. I asked for access to the checking account and keys to the office, but I was always refused.”

From here, Story said, “I think the best outcome for our board is to regroup and move forward with the mission. OKC Pride belongs to our community.”

After the closed meeting, OKC Pride members declined any comments or discussion.