Oklahoma Sen. Silk is at it again 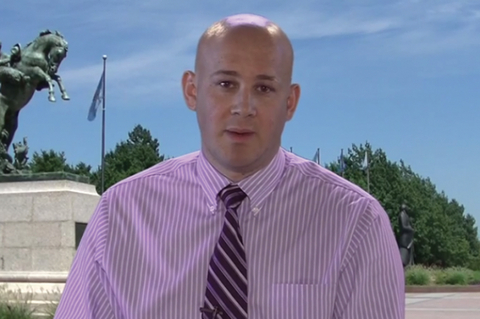 Oklahoma State Sen. Joseph Silk (R-SD 5) has introduced SB 197 that would allow individuals, privately held businesses, churches and other religious organizations to discriminate against people based on their “sincerely held religious beliefs or conscience.”

The bill is clearly an attempt to allow discrimination against same-sex married couples, but is written so broadly that it could be applied against anyone.

The essential part of the bill says:

“Notwithstanding any other provision of law, no individual shall be required by any governmental entity to do any of the following, if it would be contrary to the sincerely held religious beliefs or conscience of the individual regarding marriage, lifestyle or behavior:

“1.  Provide any services, accommodations, advantages, facilities, goods or privileges used in a marriage ceremony or celebration of a specific lifestyle or behavior; or

“2.  Provide any services, accommodations, advantages, facilities, goods or privileges to be used to promote, advertise, endorse or advocate for a specific marriage, lifestyle or behavior.”

Silk was the author of several anti-LGBTQ bills in the 2016 session of the legislature. None of these bills passed.

Troy Stevenson, Executive Director of Freedom Oklahoma, said, “Every attorney we have spoken to so far has said it’s more dangerous and vitriolic than any other bill in the nation. It gives people the right to discriminate for virtually any reason and any fair-minded person will find it offensive.

“We will defeat this bill.”

No other anti-LGBTQ bills have yet been introduced in the Oklahoma legislature. Watch The Gayly’swebsite,www.gayly.com, and its Facebook page, The Gayly, for developing news on state legislation.