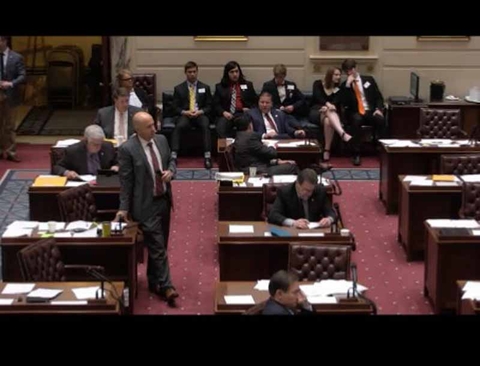 The bill would have prevented local governments – cities, towns, counties and other subdivisions – from passing anti-discrimination ordinances that go beyond the prohibitions contained in state law. Current Oklahoma state law identifies as protected classes for the purposes of anti-discrimination law the following: Race, Color, National origin, Religious, Sex, Disability, Age (40 and older), Genetic information, Military service, and being a smoker or nonsmoker.

Passage of SB 694 would have made those ordinances null and void, and would have prevented any further local governments from passing such protections.

After an extended question and debate period, The Senate voted 26 to 15 to defeat the bill, meaning local governments can still protect their LGBTQ citizens.

Senator Brecheen moved to reconsider the vote, and that motion was defeated 28 to 15.

One of the arguments presented by several Senators was that SB 694, if it became law, would risk Oklahoma facing economic boycotts similar to those imposed on North Carolina after its legislature passed HB 2.

North Carolina’s HB 2 both prevents local governments from passing ordinances more restrictive than state law and required transgender persons to use bathrooms that to conform to their gender on their birth certificate. The Oklahoma measure would have prevented city ordinances, but did not address transgender issues, although Sen. Brecheen mentioned transgender use of athletic facilities in the state of Washington in his closing argument.

Troy Stevenson, Executive Director of Freedom Oklahoma, a statewide LGBTQ advocacy group, addressed the economic consequences of SB 694, as well as SB 197, in a statement: "It is absurd that the Senate has decided to hear these anti-commerce bills on the final day before crossover.”

Today is the last day for legislation to be considered in each house of the legislature, which has to be forwarded to the other chamber. Today’s action on SB 694 effectively kills the bill.

The Senate was also scheduled to hear Senate Bill 197, by Senators Joseph Silk and Josh Brecheen. It would have allowed individuals, privately held businesses, churches or recognized religious organizations to refuse services based on their, “sincerely held religious beliefs or conscience of the individual regarding marriage, lifestyle or behavior.”

After the vote on SB 694, SB 197 was withdrawn from consideration by its authors.

Stevenson continued, “They are playing chicken with the fiscal health of Oklahoma. We are Oklahomans, and the last thing we want to do is call for a national boycott of Oklahoma, but if these bills pass, we will be left with no choice.

“These bills violate the Oklahoma Standard, and are un-American. We call on fair-minded Senators to vote their conscience and stop this madness on the floor of the Senate."

That call was answered by the defeat of SB 694 and withdrawal of SB 197. It is worth noting that, in the 48 member Senate, 41 Senators are Republicans; only 6 are Democrats. There is one vacancy in the Senate.