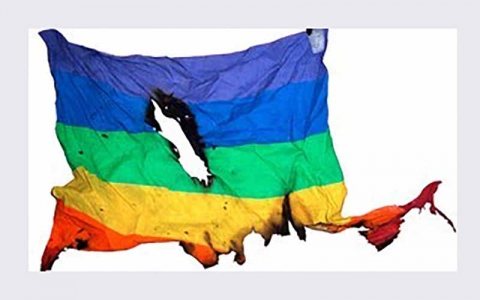 OMAHA, Neb. (AP) — An Omaha man accused of stealing a gay pride rainbow flag and burning it has been found guilty.

The Omaha World-Herald (http://bit.ly/1TxOO92 ) reports that 24-year-old Cameron Mayfield was found guilty Wednesday of arson. Prosecutors said that the charge was prosecuted as a felony, not a misdemeanor, because the incident was investigated as a hate crime.

Mayfield was accused of taking the flag from the porch of a lesbian couple who lived near him, setting it on fire and waving it in the middle of the street in March 2015.

James Martin Davis, who is Mayfield's attorney, argued the act was a drunken prank and not a hate crime.

"Just because the victims are gay doesn't make it a hate crime," Davis has said.

Mayfield had testified that he thought the flag was a spring ornament, not a gay pride flag, and that he had no idea that the his neighbors were gay.

Prosecutor John Alagaban was more than a bit skeptical. He pointed out that Mayfield passed three or four neighbors' homes — and all the flags hanging on their homes. The prosecutor also pointed out all the steps Mayfield took to steal the rainbow flag.

"His actions were too purposeful to not be targeting this couple and that item," Alagaban said.

Mayfield faces up to two years in prison.

Copyright 2016 The Associated Press. All rights reserved. This material may not be published, broadcast, rewritten or redistributed.
The Gayly - 4/28/2016 @ 3:16 p.m. CDT