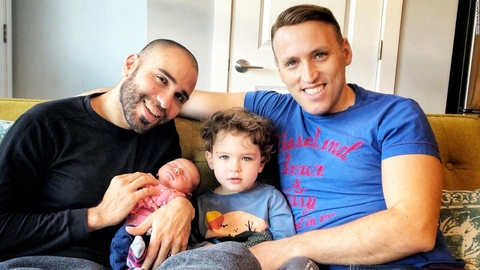 A federal court in Maryland heard arguments today in a case brought by Lambda Legal and Immigration Equality and pro bono counsel Morgan Lewis on behalf of a married gay couple and their daughter Kessem Kiviti, whom the Trump administration continues to refuse to recognize as a U.S. citizen since birth, even though both of her parents are U.S. citizens. Kessem was born abroad via gestational surrogacy, and while federal law dictates that a child born to two U.S. citizens automatically becomes a citizen, the State Department has refused to recognize Kessem as a citizen because she is not biologically related to both of her fathers.

“What we want for our daughter—especially in times of unrest—is to be able to live free of discrimination and to have access to the full rights she deserves as a born American. We only ask for equal treatment, and for the government to recognize her as the U.S. citizen she is,” said Kessem’s parents, Roee and Adiel Kiviti.

Today’s hearing follows a hearing held last week before the U.S. District Court for the Northern District of Georgia in a similar lawsuit also filed by Lambda Legal, Immigration Equality and Morgan Lewis on behalf of Simone Mize-Gregg and her parents, married U.S. citizens Derek Mize and Jonathan Gregg. As with Kessem Kiviti, the U.S. State Department refuses to recognize the U.S. citizenship since birth of Simone Mize-Gregg notwithstanding the dictates of federal law, again because she was born abroad and is not related biologically to both parents.

“The law could not be clearer on this issue:  the marital child of two U.S. citizens, who is born abroad, is automatically a U.S. citizen,” said Omar Gonzalez-Pagan, Senior Attorney for Lambda Legal, who, along with Morgan Lewis co-counsel, presented oral argument to the court. “The Department of State has sought to enforce a ‘biological relationship’ requirement that cannot be found in the law, and that inappropriately interferes with the constitutional rights of married same-sex couples and their children.  We are grateful to have had an opportunity to explain to the court, through a virtual hearing, why the State Department’s policy is unmoored from the law and raises grave constitutional concerns.”

Roee and Adiel Kiviti are a same-sex couple who married in California in 2013. They had their daughter Kessem via surrogacy in Canada in February 2019. Because only Adiel has a biological connection to Kessem, the State Department is disregarding Roee and Adiel’s marriage and treating Kessem as “born out of wedlock,” meaning she must have a biological relationship to a U.S. citizen parent who has resided in the U.S. for five years. This requirement is not meant to be applied to the children of married U.S. citizens.

“No family should have to face the fear and uncertainty of having their child’s status left in limbo,” said Karen Loewy, Senior Counsel for Lambda Legal and one of the family’s attorneys. “Supreme Court case law has made clear that the State Department cannot treat married same-sex couples and their children as second-class citizens. We look forward to having the federal government recognize Kessem as the U.S. citizen she is and bringing peace of mind to her family.”

“The State Department’s position that children born during the course of a marriage are actually born ‘out of wedlock’ is absurd, in stark contrast to statutory law, and unconstitutional,” said Aaron C. Morris, Executive Director of Immigration Equality. “Every federal court that has addressed the issue has rejected the government’s arguments. The State Department should change its discriminatory policy immediately. And, until it does, we will continue to fight for the dignity and protection of children like Kessem.”

The Immigration and Nationality Act states that children of married U.S. citizens born abroad are U.S. citizens from birth so long as one of their parents has lived in the U.S. at some point, but the State Department routinely denies that right to same-sex couples and their marital children. While different-sex couples are automatically presumed to both be parents of their children, same-sex couples are subjected to invasive questioning about how they brought their child into their family, and because one parent is not a biological parent, they are treated as if they are not married, and their children are not recognized as citizens unless the biological parent can meet additional criteria.

The lawsuit Kiviti v. Pompeo was filed last July in the U.S. District Court for the District of Maryland.

ALSO READ: Similar case about a same-sex couple in Georgia and the fight for citizenship of their child.