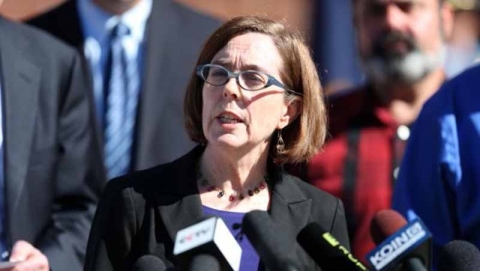 Brown is the first ever openly bisexual Governor in the United States, the first ever LGBT advocate in the Department of Veteran Affairs and has been an advocate for LGBT youth in Oregon by implementing rules for the safety and security of all children, LGBT included. Brown also banned conversion therapy statewide.

Brown stated to the caucus, "I believe [Donald] Trump doesn’t have even have the experience to lead a White House tour, much less live in the White House as President."

She described Hillary Clinton as a champion for human rights.

“She will break down barriers for every one of us.”

She also described Hillary Clinton as someone that would “stand toe-to-toe” with the NRA to ensure that another tragedy like the Pulse nightclub shooting would not happen.

Brown would go on to say, “This is serious, we need to work together, take down the NRA, and put responsible gun laws into effect and elect Supreme Court justices that will ensure civil rights are protected.”

Brown asked, “Are you ready for Hillary Clinton?” to which the audience responded with wild cheers and applause.

She concluded her speech by saying that Hillary Clinton is ready to lead our country.