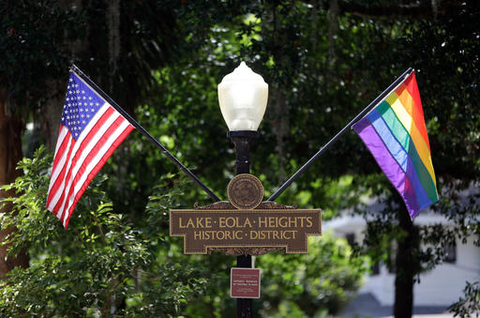 The rainbow flag flies along side of the American flag in the Lake Eola Heights neighborhood in Orlando, Fla. In the aftermath of the Pulse nightclub shootings, the rainbow colors are appearing all over metro Orlando. AP Photo by John Raoux.

ORLANDO, Fla. (AP) — Two months after the massacre of 49 people at a gay nightclub in Orlando, residents and officials say the community is coming together in unprecedented solidarity.

The rainbow flag associated with gay pride seems to have become the area's unofficial symbol. Stores are selling out of "#OrlandoUnited" T-shirts with a rainbow heart.

There traditionally has been little sense of shared history among most Orlando residents, since two-thirds come from outside the state.

But residents and leaders say the collective mourning has tightened Orlando bonds and created the strongest sense of community in recent memory.