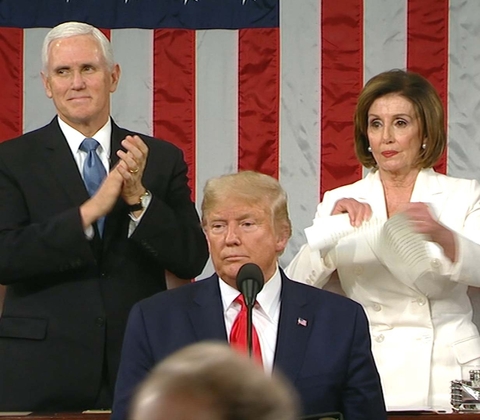 House Speaker Nancy Pelosi defended her decision to rip up President Donald Trump's State of the Union address earlier this month, a dramatic move that was criticized by Republicans as being disrespectful and a "breach of decorum."

"One of my disappointments is the fact that with all that we have done legislatively, whether its equal pay for equal work, raising the minimum wage, gun violence protection, issues that relate to our children, the list goes on. I thought, well, let's get attention on the fact that what he said here today was not true," Pelosi told CNN's Christiane Amanpour in an exclusive interview from the Munich Security conference Saturday. The full interview will air on CNN International at 1 p.m. ET on Monday.

Pelosi reiterated that she had no intention of tearing up her copy of Trump's annual address to Congress, but that as she read along, she "realized that almost every page had something in it that was objectionable."

The tension on display at this year's State of the Union came a day before the GOP-led Senate was expected to and eventually voted to acquit Trump of two articles of impeachment.

She criticized Republican senators for not having the "courage" to vote guilty though some voiced that Trump's actions regarding Ukraine were inappropriate, "except for Mitt Romney. God bless him." Romney, a Utah Republican, was the only GOP senator to vote to convict on one of the two articles of impeachment.

Pelosi also told Amanpour that she "can't even envision a situation" where Trump would be reelected, but added, "We don't take anything for granted."

"We have to have our own vision for the future, but everybody knows that we must be unified in making sure that he doesn't have a second term," she said.

She argued that any of the Democratic candidates "would be a better president than the current occupant of the White House, but we want to be very positive about how we go forth."

The crowded field of Democratic candidates that started out with about 20 hopefuls has winnowed down to eight following the Iowa caucuses and New Hampshire primary.

A frontrunner in national polls early in the race, former Vice President Joe Biden is currently trailing in the pledged delegate vote count, after a poor showing in the first two nomination contests.

Though she isn't endorsing a candidate, Pelosi told CNN, "Quite frankly, with all the respect in the world for Iowa and New Hampshire, I'm not counting Joe Biden out. There are still races ahead that are much more representative of the country."