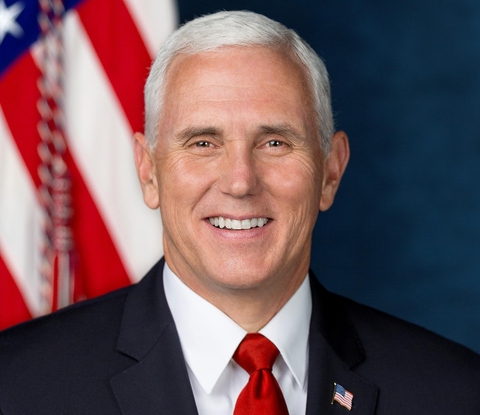 Vice President Mike Pence hosted Irish Prime Minister Leo Varadkar and his same-sex partner at the Naval Observatory for the Friends of Ireland breakfast on Thursday.

While the Pences hosted Varadkar last year as part of an annual trip the Irish delegation makes to Washington, this year the vice president and his wife, Karen Pence, also invited Varadkar's partner, Matthew Barrett.

Varadkar is one of only a handful of state leaders globally who identify as gay. He touched on his sexuality in his brief remarks at the breakfast: "I stand here, leader of my country, flawed and human, but judged by my political actions and not by my sexual orientation, my skin tone, gender or religious beliefs."

"Last year you and Karen said that my partner, Matthew, would be welcome to join us, and we're both really honored to accept the invitation this year," Varadkar said.

Pence's support for the LGBT community has been called in to question throughout his political career. Pence, a staunch conservative Christian, signed the Religious Freedom Restoration Act while he was governor of Indiana. Critics of the law contend that individuals and businesses could use it to discriminate against the gay community on the basis of religion.

Pence also signaled support for federal funds to be allocated for gay "conversion therapy" on his 2000 US House campaign website, where it said "resources should be directed toward those institutions which provide assistance to those seeking to change their sexual behavior."

Karen Pence recently came under fire for accepting a job as an art teacher at a private Christian school that bars LGBTQ students, parents and employees.

"We're also really honored to be joined by your partner, Dr. Matthew Barrett. He does great work at Northwestern Memorial Hospital in Chicago," the vice president said to applause.

The visit by Irish dignitaries included a Friends of Ireland luncheon on Capitol Hill with President Donald Trump, where Trump and Varadkar discussed Brexit and Trump reaffirmed the strength of the US-Ireland relationship.