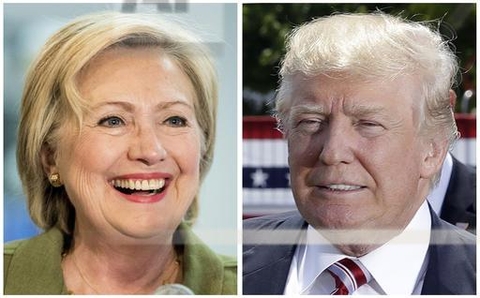 WASHINGTON (AP) — Donald Trump wants to blow up the way the United States does business with the rest of the world.

Hillary Clinton repudiates an ambitious Asia-Pacific trade deal she once praised and vows to appoint a special prosecutor to keep U.S. trading partners in line.

American trade policy is taking a bipartisan beating this election year, reflecting voters' deep skepticism over the benefits of open trade with China and other countries at a time of sluggish economic growth and stagnant incomes.

The hostility is jeopardizing a mainstay of U.S. policy: Since World War II, the United States has championed free trade as a way to promote global peace and prosperity. It has coaxed countries like China to join the World Trade Organization and other institutions and to sign trade agreements that bind them to a code of conduct in the global marketplace.

"Make no mistake, the proposedtrade policies of both former Secretary (of State) Hillary Clinton and Mr. Donald J Trump are huge deviations from ... decades of consensus," Adam Posen, president of the Peterson Institute for International Economics, said at a conference on the candidates' trade policies in September.

Expanded trade has taken a toll on U.S. manufacturing jobs, especially in industries such as textiles and furniture-making that are vulnerable to low-wage competition overseas. The U.S. last year ran a $500 billion trade deficit with the rest of the world, most of it with China.

In a report earlier this year, economists David Autor of the Massachusetts Institute of Technology, Gordon Hanson of the University of California, San Diego, and David Dorn of the University of Zurich found that the damage from trade with China was worse than they expected. Americans who were thrown out of work by the "China shock" bounced from job to job and suffered a drop in lifetime pay.

Asked about threats to U.S. workers, 80 percent of more than 5,000 Americans surveyed in October by the Pew Research Center cited the outsourcing of jobs to foreign countries and 77 percent pointed to competition from foreign imports.

Still, many economists say it was technology — not foreign competition — that took away most of the 7 million manufacturing jobs lost since 1979.

Trump and Clinton say trade policy can be overhauled to do a better job of creating or protecting American jobs — though Trump is willing to be far more aggressive in overturning U.S. economic relations with the rest of the world.

Here is a summary of their proposals:

TRUMP: The Republican candidate blames job losses on unfair trade agreements. The man who wrote "The Art of the Deal" says incompetent U.S. negotiators are routinely out-maneuvered by sharper foreigners. He threatens to tear up existing trade treaties, including the North American Free Trade Agreement between the U.S., Canada and Mexico, calling it "the worst single trade deal ever approved in this country."

Most economists say NAFTA had little impact on the overall job market or the economy, confounding the optimistic predictions of its supporters and the dire warnings of opponents.

CLINTON: Like Trump, Clinton has come out against the Trans-Pacific Partnership, an ambitious trade pact the Obama administration negotiated with 11 Pacific Rim countries. TPP awaits congressional approval. Critics say the deal exposes U.S. workers to competition with low-wage workers in countries such as Vietnam. Clinton's opposition is a flip-flop: As President Barack Obama's secretary of state, Clinton called the TPP "the gold standard" for trade deals.

CRACKING DOWN ON CHINA AND OTHER COMPETITORS

CLINTON: The Democratic candidate has promised to appoint a chief trade prosecutor and triple the number of trade enforcement officers to crack down on unfair practices by the United States' trading partners.

TRUMP: He has vowed to name China a "currency manipulator" and punish it with trade sanctions. He says Beijing keeps China's currency, the yuan, artificially low to give Chinese companies a price edge in international markets.

Economists say Trump's charges are outdated. Three or four years ago, China was pretty clearly holding the yuan down. But more recently, market forces, not government bureaucrats, have been pushing the currency lower as the Chinese economy decelerates. If anything, the Chinese government has been intervening in the currency markets to slow the yuan's drop. On Oct. 14, the U.S. Treasury Department once again decided not to label China a currency manipulator.

TRUMP: He threatens to impose tariffs — or taxes — of 45 percent on Chinese imports and 35 percent on goods shipped in from Mexico in an attempt discourage American companies from moving south of the border.

Congress normally approves tariffs and trade agreements. But Gary Hufbauer, senior fellow at the Peterson Institute, says that lawmakers over the years have given the White House the power to act unilaterally in foreign affairs. Nothing "prevents President Trump from imposing blunderbuss tariffs against one or more foreign countries," Hufbauer wrote. The World Trade Organization could later rule that the U.S. acted unfairly — but Trump has threatened to pull out of the WTO, too.

Whatever the legality of Trump tariffs, other countries would almost certainly retaliate by slapping their own taxes on U.S. goods. The Peterson Institute warns that Trump's trade proposals "could unleash a trade war that would plunge the U.S. economy into recession and cost more than 4 million private sector American jobs."

CLINTON: The Peterson Institute predicts Clinton's program would be less damaging as it mainly calls for stepped-up enforcement of existing policies.