Pompeo unveils human rights commission; it may roll back protections 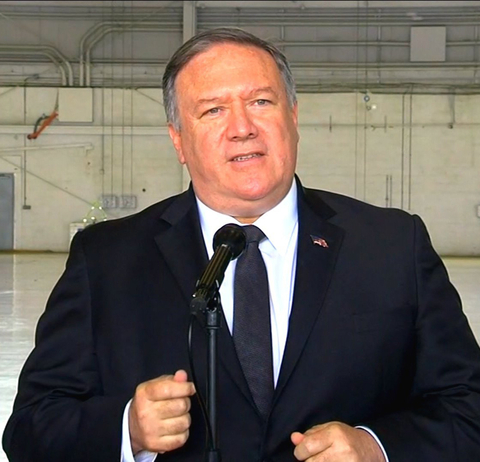 US Secretary of State Mike Pompeo announced a new commission to examine the role of human rights in US foreign policy and which rights should be "honored," raising fears that the Trump administration may be trying to roll back protections for women, LGBTQ groups and minorities.

US Secretary of State Mike Pompeo announced a new commission to examine the role of human rights in US foreign policy and which rights should be "honored," raising fears that the Trump administration may be trying to roll back protections for women, LGBTQ+ groups and minorities.

"What does it mean to say or claim that something is, in fact, a human right," Pompeo said at the State Department Monday, as he unveiled the Commission on Unalienable Rights. "How do we know or how do we determine whether that claim that this or that is a human right, is it true, and therefore, ought it to be honored?" the top diplomat asked.

"Words like 'rights' can be used for good or evil," he added.

Pompeo said the committee will conduct "one of the most profound reexaminations of the unalienable rights in the world since the 1948 Universal Declaration," of Human Rights was adopted by the United Nations, declaring that "all human beings are born free and equal in dignity and rights" and are entitled to a series of rights.

Pompeo argued that the definition of human rights has grown fuzzy, that the concept is now sometimes used to defend "gross violations" and that the US has to be "vigilant that human rights discourse not be corrupted or hijacked or used for dubious or malignant purposes."

But many see the commission as "a new body designed to weaken human rights," as New Jersey Sen. Robert Menendez, the lead Democrat on the Foreign Relations Committee, described it on Monday.

Menendez and others question why Pompeo did not include the State Department bureau that focuses on human rights in the creation of the commission or its work, staffing it instead with some high-profile opponents of both LGBTQ+ rights and abortion, such as his former mentor who he appointed as its head, Harvard law professor Mary Ann Glendon.

They point to the administration's record on human rights, including President Donald Trump's approach to Saudi Arabia's killing of US-based journalist Jamal Khashoggi and the President's affinity for authoritarian leaders with appalling human rights records, such as North Korea's Kim Jong Un.

They flag the administration's aggressive push to limit reproductive rights and access to abortion, its silence on LGBTQ+ abuses abroad and raise the possibility that the secretary is injecting his faith into matters of policy and law. They also question the language being used to describe the re-evaluation of rights.

Blurring the line between church and state?

Like some on Capitol Hill, Serra Sippel, president of the Center for Health and Gender Equity, a US-based nonprofit that promotes sexual and reproductive health and rights in the US and abroad, raised concerns that Pompeo was blurring the line between church and state.

She pointed to an April interview Pompeo did with the Christian Broadcasting Network, in which he said that as a member of Congress, then CIA director and now as secretary of state, "the task that I have is informed by my understanding of my faith, my belief in Jesus Christ as the Savior ... I think that makes a real difference."

There is, she said, "a disturbing pattern of not only undermining human rights of LGBTQ+ and women and other people who face stigma and discrimination, but also this pattern of inserting Secretary Pompeo's personal faith into the work of the State Department. The undermining of the separation of church and state, and human rights are really hand in hand."

Serra noted that one right enshrined in the 1948 UN declaration on human rights is the right to request asylum.

"This administration is using rights language for the dubious purpose of denying rights to certain people -- women, LGBTQ+ and refugees -- look what's happening on the border," she said. "That's a clear violation of the rights of those trying to claim asylum."

New York Rep. Eliot Engel, the Democratic chairman of the House Foreign Affairs Committee, said the State Department had been very opaque about the creation and purpose of the commission, "responding vaguely only at the 11th hour. That's why I cosponsored a measure that recently passed the House to prohibit funding for this bizarre effort."

"The Secretary wants to make an end run around established structures, expertise, and the law to give preference to discriminatory ideologies that would narrow protections for women, including on reproductive rights; for members of the LGBTQ+ community; and for other minority groups," Engel charged.

The State Department did not respond to requests for comment about the criticisms and concerns being raised.

Others said the concerns were an over-reaction, and that it is a good idea to re-examine what the US considers an important right.

"The reason why you debate those things is that it defines your level of interest; that defines how much resources you're willing to invest," Carafano said. "A government can't do everything, so differentiating between what's truly vital and what's nice to have is important."

Glendon, the head of the new commission, was a mentor of Pompeo's at Harvard Law School and is known for her opposition to abortion.

She has stirred controversy in the past. A staunch Catholic, in 2002 she criticized the decision to nominate the Boston Globe for a Pulitzer Prize for its reporting on the sexual abuse of children by Catholic priests, saying that "if fairness & accuracy have anything to do with it, awarding the Pulitzer to the Boston Globe would be like giving the Nobel Peace Prize to Osama bin Laden."

She also declined an award from Notre Dame University in 2009, because it had asked President Barack Obama to give the commencement address and she disagreed with his support for abortion rights.