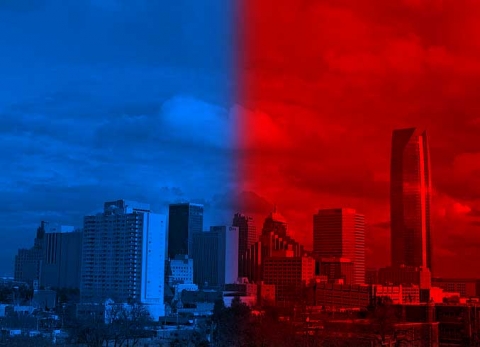 OKLAHOMA CITY (AP) — Presidential candidates on both sides of the aisle hope a flurry of last-minute campaign stops and television ads in Oklahoma pays off with a win in a state that Republicans like to brag is the "reddest of red."

Polls opened at 7 a.m. Tuesday with no major problems, according to Oklahoma Election Board spokesman Bryan Terry.

GOP candidates Ted Cruz, Donald Trump and Marco Rubio all hosted campaign stops in Oklahoma in recent days ahead of Super Tuesday, the biggest single-day delegate haul of the nomination contests when voters in 12 states cast votes for party nominees.

And Vermont Sen. Bernie Sanders returned to Oklahoma last weekend for his second rally in as many weeks, hoping to take advantage of registered independents allowed to vote in the Democratic primary for the first time in state history to notch a win over fellow Democrat Hillary Clinton.

Registered independents make up more than 10 percent of Oklahoma's electorate, but those voters have previously been unable to vote in primary elections, which traditionally have been closed except to registered members of each party. That changed last year, when the Oklahoma Democratic Party changed its rules to allow registered independents to vote in their primaries in 2016 and 2017, hoping to give the fastest growing segment of the electorate more of a say in narrowing the field of candidates.

"We really don't know what's going to happen because we haven't been through this before," said Russell Griffin, the new executive director of the Oklahoma Democratic Party. "I can't wait to see what happens on (Tuesday)."

Terry said it was too early to predict a turnout, but noted that about 37 percent of the state's approximately 2 million voters cast ballots in 2008, the last time the presidential race did not feature an incumbent, and said there have been about 52,000 absentee votes already cast this year.

"It seems clear interest is higher this year," Terry said.

In Tulsa, bookkeeper Beverly McPherron, 69, said she initially supported Clinton but ultimately voted for Sanders because she was increasingly put off by how she ran her campaign compared to the Vermont senator.

"I thought she stood for something, and then she started to sound like another (politician)," she said. "I just got to the point where I just couldn't believe her," McPherron said after voting.

Sanders has placed an emphasis on winning Oklahoma, hitting the airwaves with a barrage of advertising and packing about 6,000 enthusiastic supporters into rallies last week in Tulsa and Oklahoma City. Unlike many of the southern states in Super Tuesday's election, Oklahoma has a smaller percentage of African-American voters, who have overwhelmingly favored Clinton.

Rubio also returned to Oklahoma the night before Oklahoma's primary election, hitting a campaign stop in Oklahoma City with former Louisiana Gov. Bobby Jindal and touting the endorsement of former U.S. Sen. Tom Coburn, a Republican maverick who resigned from the Senate in 2014, but remains tremendously popular in Oklahoma.

With mostly clear skies and mild temperatures forecast, weather should not be a factor, and Terry said he did not believe that would matter much, anyway.

"I don't know if the weather, barring something like a blizzard, was going to keep people away today."