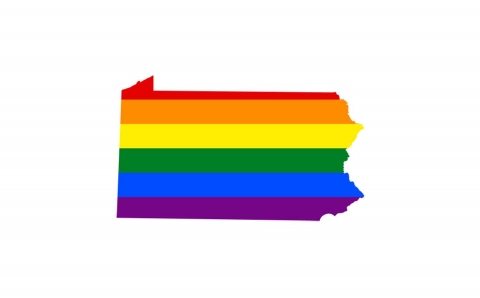 HARRISBURG, Pa. (AP) — A fiery public debate is flaring in the state over long-stalled legislation designed to outlaw discrimination based on someone's sexual orientation or gender identity.

Anti-sexual assault activists and the business community are lining up with gay rights activists against a social conservative organization over the legislation, which is bottled up in Pennsylvania's Republican-controlled Legislature.

The debate is happening just days after lawmakers in North Carolina, Georgia and Mississippi passed legislation that critics say would permit discrimination against people who are lesbian, gay, bisexual or transgender.

Democratic Gov. Tom Wolf has tried to raise the profile of the issue in Pennsylvania, in light of a backlash against North Carolina, and has urged Republicans to allow a vote on it. He suggested that giving protection against discrimination for the gay and transgender community is the evolution of a civil rights movement that banned discrimination because of race.

"We shouldn't be discriminating on this basis either," Wolf told a KQV-AM radio interviewer last week. "I think that's an appropriate thing for a government to say: 'We have ground rules here.'"

Identical House and Senate bills long languishing in committee would add categories — sex, sexual orientation, gender identity or expression — to a law that empowers the state Human Relations Commission to investigate complaints of discrimination in employment, housing and public services because of someone's race, religion, age or handicap. The commission can impose civil penalties, such as back pay or damages.

In recent days, an organization called Defend My Privacy, backed by the socially conservative Pennsylvania Family Institute, put up a website and Harrisburg-area highway billboards attacking the legislation, referred to as Bathroom Bills. It also set up a booth at last weekend's Pennsylvania Leadership Conference, a prominent gathering of conservatives that hosted GOP presidential candidates Ted Cruz, a U.S. senator from Texas, and John Kasich, Ohio's governor.

It said the Bathroom Bills would spur lawsuits to abolish gender-specific bathrooms and locker rooms in schools and public places and would lead to sexual assaults in public restrooms.

The Bathroom Bill attack echoes the approach taken by opponents in other states. More than 20 states have anti-discrimination laws for the gay and transgender community, as do cities including Philadelphia and Pittsburgh. The bills' proponents said there simply is no history of those patterns.

"This is really a red herring to scare people, and the organizations and advocates who know best don't believe there's a problem," said Rep. Dan Frankel, D-Allegheny, the lead sponsor of the House measure.

On Tuesday, Pennsylvania Competes, a business advocacy group backed by The Hershey Co., GlaxoSmithKline and others, called Defend My Privacy a "shadow group" and said it should take down the "inaccurate, fear-based misinformation."

It is "100 percent inaccurate and destructive to the mission of ending discrimination in this state," Pennsylvania Competes said.

The Pennsylvania Coalition Against Rape said "fear-mongering tactics about risk of sexual violence" is used to help raise support for discriminatory legislation like North Carolina's. Rather, it said, research shows that states, cities and schools that have given transgender people the right to use the bathroom of the gender with which they identify report no increase in assaults in bathrooms.