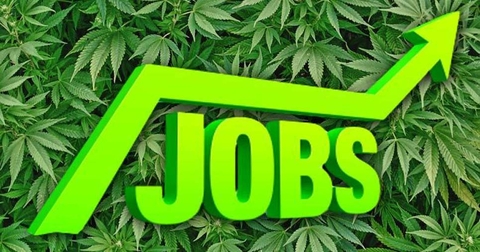 The state-licensed cannabis industry gained over 64,000 new employees in 2018, and now employs over 200,000 full-time workers, according to data compiled by Whitney Economics and the online content provider Leafly.com.

“The federal government needs to deschedule marijuana to allow states to better and more fully benefit from the economic growth engine that is the legal marijuana industry," NORML Executive Director Erik Altieri said. "Further, state regulators need to ensure as this sector expands its economic benefits are shared by all, including and most especially by those who suffered most under the failed policy of criminal prohibition.”

The report, entitled Cannabis Jobs Count, identifies some 211,000 full-time jobs in the legal cannabis sector. This total increased to 296,000 jobs when ancillary employers are included.

By comparison, 112,000 Americans are estimated to currently work in the textile industry, while only about 52,000 people are employed by the coal mining industry.

“[T]he legal cannabis industry remains a substantial and unrecognized engine of grassroots job creation,” authors concluded. “In fact, cannabis job growth is proceeding at double digit rates in many states despite being overtaxed locally and heavily penalized at the federal level.”