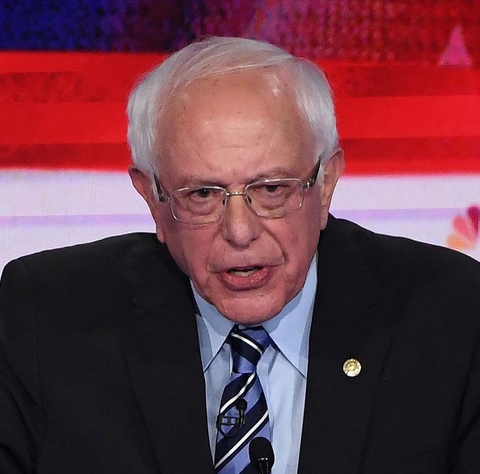 Sen. Bernie Sanders, while wading in to a local fight over a Philadelphia hospital, proposed Monday a plan to create a federal fund to help local governments purchase for-profit hospitals struggling with debt and in danger of closing.

The announcement came during a speech at a rally to save Hahnemann University Hospital. Hahnemann is currently in bankruptcy proceedings and its leadership has signaled plans to close the hospital this fall. Sanders' appearance was part of a last-minute request from activists battling to save the hospital.

"I will be very soon introducing legislation in the Senate to establish a $20 billion emergency trust fund to help states and local communities purchase hospitals that are in financial distress," Sanders said. "In my view, any time a hospital is put up for sale in America, the local community or the state must have the right to buy it first with emergency financial assistance.

The rally in Philadelphia is just one part of a week long effort by the Vermont independent to highlight his commitment to
his "Medicare for All" plan. On Wednesday, Sanders will deliver what his campaign is describing as a "major" speech on the topic. As many of his fellow Democratic opponents begin to unveil their health care plans, Sanders is hoping to emphasize not only his support for full, single payer nationalized health care system, but also to show that he was the first national candidate to offer up support for the concept.

In Monday's speech, Sanders bashed the current health care system, arguing that the only way to prevent this scenario from happening all over America is to create a single payer system with a primary goal of patient care, not profits.

"It's not based on a system of profiteering, whether it's real estate speculators, whether it's insurance companies, or whether it's drug companies. Health care is a human right," Sanders told CNN after his speech.

Sanders chose to get involved in this fight on the same day that his Democratic primary opponent, former Vice President Joe Biden, released his health care plan. Biden's plan offers a stark contrast to Sanders' Medicare For All legislation that would completely eliminate private insurance.

Biden has proposed expanding on former President Barack Obama's Affordable Care Act. He believes the private health insurance market should be protected, but the government must take steps to rein in costs and offer a publicly subsidized option.

In response to the Biden plan, Sanders argued that keeping a private insurance option available is not viable.

"At the end of the day, you've either got to be on the side of the people or the side of the health insurance companies. I know what side I'm on. Others will have to make their own choice," Sanders said in a statement. "We must pass Medicare for All."

Hahnemann is in the midst of Chapter 11 bankruptcy proceedings and has already shuttered many of its services. The hospital's private ownership group, Philadelphia Academic Health System, has plans to completely close the hospital by September. The Pennsylvania Association of School Nurses and Nurse Practitioners (PASNNAP), a union representing some of the hospital workers, said the closure could lead to the loss of 2,500 jobs and create a health care vacuum for a key section of Philadelphia.

"It's going to have a very large impact," Shanna Hobson, a nurse at the hospital and a member of PSNNAP, said in an interview with CNN. "We provide a lot of services, especially for patients that don't have a lot of insurance, and it is going to be very difficult for the other hospitals to absorb all of these patients."