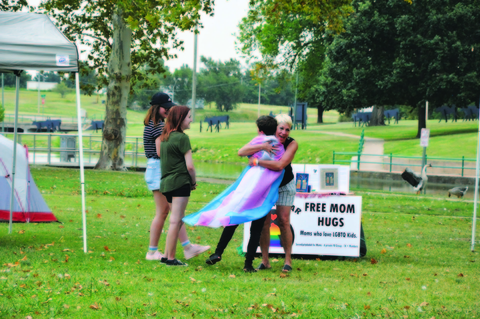 Community activist Sara Cunningham will be honored with OKC’s Cathedral of Hope OKC/United Church of Christ 2018 Hero of Hope award. Cunningham, known for her Free Mom Hugs and for writing the book How We Sleep at Night: A Mother’s Memoir, will accept the award Sunday, January 28.

Cunningham is an OKC mom who has made it her life’s mission to open her arms to bring more love to the LGBT+ community. Her mission started after her son told her he is gay.

Her book, published in 2014, chronicles her journey and is a sought-after resource for other parents whose children have come out as LGBT+.

The Christian teachings she understood to up to that point were that being LGBT+ was sinful. After much wrestling with her faith and with God, she came to embrace every part of her son’s identity, while keeping her Christian faith.

The church recognizes a Hero of Hope as someone who has taken courageous stands for the rights of people and especially works to change how the world thinks about LGBT+ people.

“[They] change how LGBT+ people think about God; reach marginalized people, especially teens living in isolation in small towns; and redefine Christianity as an including faith rather than an excluding religion,” says organizers.

Cathedral of Hope will present the Hero of Hope award to Cunningham to reflect gratitude for her service as an activist seeking justice and equality for the LGBT+ community.

“Her work and accomplishments serve as a beacon of hope to a community that regularly endures injustice brought on by prejudice and intolerance,” added organizers.

Cunningham is the founder of OKC Free Mom Hugs, a worldwide movement of parents standing up for the LGBT+ community and giving hugs to those whose own parents no longer embrace them.

She took the Free Mom Hugs movement on the road last Mother’s Day, traveling to the birthplace of the LGBT+ Civil Rights movement at Stonewall in NYC. All along the way, she stopped to share her message with moms, the LGBT+ community and Christian organizations.

Helping organize OKC Pride Events, Cunningham has been a participant in the Transgender Day of Remembrance and World AIDS Day services. She frequently reaches out to non-affirming churches and agencies to meet with them in hopes of causing change towards affirmation for the LGBT+ community.

Cunningham will speak and be presented the award during Cathedral of Hope OKC's evening service on Sunday, January 28, at 6 p.m. at of Church of the Open Arms, 3131 N. Pennsylvania Ave., Oklahoma City. There will be a reception afterward at 7 p.m. All are invited to attend both events.

Cathedral of Hope OKC is a progressive and inclusive church of the United Church of Christ denomination. They welcome and include people into the life and ministry of the congregation, regardless of faith background, gender, sexual orientation, gender identity or expression, ability, legal status or race. For more information, visit www.cohokc.com.