Sarah Sanders admitted she lied to the White House press 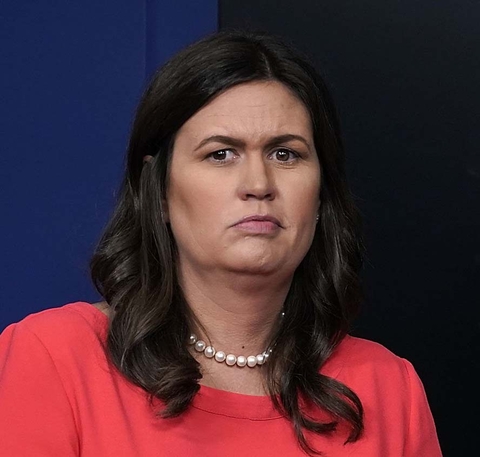 Does she have any credibility left?

"Not founded on anything" is the new "alternative facts."

The term applies to White House press secretary Sarah Sanders and her misleading statements from the press briefing room podium. Now some prominent journalists are questioning whether she should remain in her job.

Robert Mueller's report confirms that Sanders simply made it up when she said that "countless" FBI agents had told her that they were thankful Trump had fired FBI Director James Comey.

Sanders made similar claims multiple times on two different days. Yet she told Mueller's office in an interview that she merely made a "slip of the tongue."

According to Mueller's report, "she also recalled that her statement in a separate press interview that rank-and-file FBI agents had lost confidence in Comey was a comment she made 'in the heat of the moment' that was not founded on anything."

So there it is — "not founded on anything" — a remarkable admission from a government official who is paid to communicate accurately with the public.

Sanders has been accused of deceptive practices many times during her nearly two-year-long stint as press secretary. But the example laid bare in Mueller's report — when she was still a deputy press secretary — is striking because Sanders fessed up to it.

With Sanders' credibility even more severely damaged, White House correspondent April Ryan said Thursday night that "she should be fired, end of story."

Ryan, the Washington bureau chief for American Urban Radio Networks and a CNN political analyst, said on CNN's "Erin Burnett OutFront" that the Mueller report showed how Sanders "out and out lied."

"Sarah plays a dangerous game in that room, and so has Sean," she said, referring to Sanders' predecessor Sean Spicer.

"The game is dangerous because she is lying to the American public... If you can't trust her talking about that, what can you trust her about?"

Ryan went further than other reporters by calling for Sanders' ouster, but others also reiterated their concerns about the press secretary on Thursday.

MSNBC's Mika Brzezinski tweeted, "Sarah Sanders lying and doubling down on it. A total disgrace!"

"If she ever holds another briefing, she should be grilled on that," Aaron Blake of the Washington Post tweeted.

There have only been two briefings so far this year, and the last one took place 38 days ago.

The false statements that drew the Mueller team's attention were made in May 2017, when Sanders sought to defend Trump's firing of Comey.

On May 10, when a reporter pushed back on Sanders' claim that "the rank and file of the FBI had lost confidence in their director," and quoted an FBI special agent who said "the vast majority of the bureau is in favor of Director Comey," she said "Look, we've heard from countless members of the FBI that say very different things."

According to Mueller's report, Sanders spoke with Trump after the press briefing, and Trump "told her she did a good job and did not point out any inaccuracies in her comments."

The next day, May 11, Sanders went even further. A reporter asked: "What led you and the White House to believe that he had lost the confidence of the rank and file of the FBI when the Acting Director says it's exactly the opposite?"

Sanders responded: "Well, I can speak to my own personal experience. I've heard from countless members of the FBI that are grateful and thankful for the President's decision. And I think that we may have to agree to disagree. I'm sure that there are some people that are disappointed, but I certainly heard from a large number of individuals — and that's just myself — and I don't even know that many people in the FBI."

This was, according to Sanders, a "slip of the tongue."

Sanders declined to respond to questions from CNN Business on Thursday night.

But she briefly addressed the matter during an appearance with Sean Hannity on Fox News.

"I acknowledged that I had a slip of the tongue when I used the word 'countless,' but it's not untrue," Sanders said. She said the point she was making "is that a number of both current and former FBI agents agreed with the president. James Comey was a disgraced leaker who tried to politicize and undermine the very agency he was supposed to run."