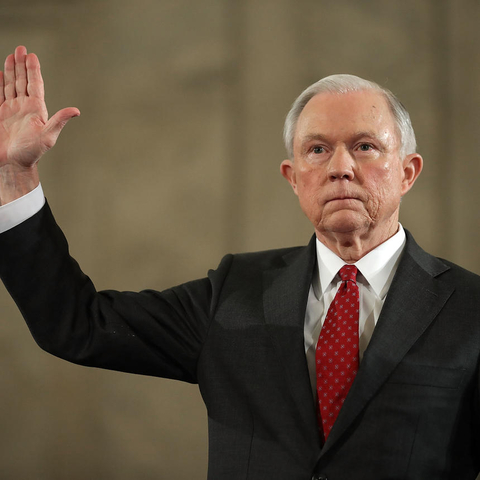 Attorney General Jeff Sessions came to the defense of the conservative group Alliance Defending Freedom in a wide-ranging speech on religion Wednesday evening, taking direct aim at the Southern Poverty Law Center for labeling the conservative organization a "hate group."

"We are not going to partner with hate groups. Not on my watch," Sessions said.

Alliance Defending Freedom is the group behind the lawsuit brought by a Colorado baker who refused to create a wedding cake for a same-sex couple and recently prevailed at the Supreme Court. Sessions came under fire last year for speaking to the group behind closed doors, but Wednesday's speech was streamed live on the group's Facebook page.

"When I spoke to ADF last year, I learned that the Southern Poverty Law Center had classified ADF as a 'hate group,' " Sessions said. "They have used this designation as a weapon and they have wielded it against conservative organizations that refuse to accept their orthodoxy."

"You and I may not agree on everything -- but I wanted to come back here tonight partially because I wanted to say this: You are not a hate group," Sessions added, prompting applause from the crowd.

In a statement on its website, Southern Poverty Law Center President Richard Cohen defended the designation.

"Just as sincerely held religious beliefs would not be a defense to a hate crime prosecution, vilifying others in the name of religion should not immunize a group from being designated as a hate group, in our view," Cohen said. "And it's ironic to suggest that the rights of ADF sympathizers are under attack when the ADF is doing everything in its power to deny the equal protection of the laws to the LGBT community."

Sessions went on to praise Alliance Defending Freedom's success at the Supreme Court and the baker, Jack Phillips, during his remarks Wednesday evening.

The court ruled in favor of Phillips in June, concluding that the Colorado Civil Rights Commission had showed hostility toward him based on his religious beliefs.

"More than 100,000 people tweeted about it. It was the third most tweeted-about topic on Earth at one point that day," he said. "Late-night comedians joked about it. ... Some of them were pretty funny -- have to admit."