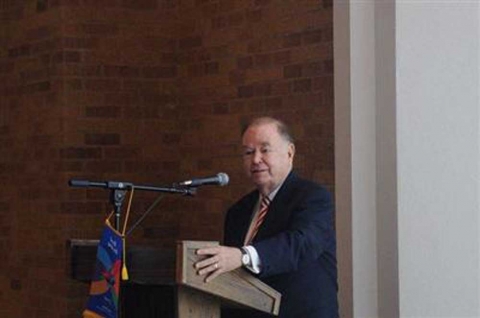 OU President David Boren helped deliver petitions with the signatures of more than 300,000 voters who support a penny sales tax. Photo by The Norman Transcript via AP.

OKLAHOMA CITY (AP) — Vowing to secure a pay raise for the state's teachers, University of Oklahoma President David Boren on Thursday helped deliver petitions with the signatures of more than 300,000 voters who support placing a penny sales tax on the November ballot.

Flanked by teachers, students and other education supporters, the former Oklahoma governor and U.S. senator said the roughly 308,000 voter signatures marks a record high for an initiative petition in the state.

"We've made history today, and in November we're going to make another chapter in the history book of Oklahoma when we pass State Question 779," Boren said to a roar of applause. "Oklahomans will not stand on the sidelines while our system of public education is literally being destroyed in this state. We're not going to take it any longer."

The group had until mid-May to gather the roughly 123,000 signatures needed to get the proposal on the ballot.

The one-cent sales tax would generate about $615 million annually, with about 70 percent of it designated for a $5,000 pay raise for Oklahoma teachers and other funding for K-12 schools. Nearly 20 percent of it, or $120 million, would go to state colleges and universities, with the rest going for early-childhood education and career-technology centers.

Oklahoma's combined state and average local sales tax rate of 8.82 percent in 2016 was the sixth highest in the nation, according to the Tax Foundation, a Washington, D.C.-based think-tank that advocates for broad-based, low-rate tax policies. A one-cent increase would give Oklahoma the highest sales tax rate in the nation. The same foundation ranks Oklahoma's overall tax burden as 12th lowest out of 50 states.

Mostly because of concerns about the high sales tax rate, House Speaker Jeff Hickman said Republican legislative leaders are discussing a plan to develop a separate teacher pay raise proposal for voters to consider. Hickman said a revenue source for the pay hike hasn't been determined, but he said the proposal likely wouldn't include additional funding for colleges and universities.

Meanwhile, the head of the lobbying arm of the Oklahoma Council of Public Affairs, a conservative think tank opposed to higher taxes, called on lawmakers to find some other way to pay for the teacher pay raise.

"It's very doable without increasing taxes," said Dave Bond, the CEO of OCPA Impact, which filed an unsuccessful court challenge against the initiative petition. "And certainly not by increasing our sales tax to the highest in the country.

"Republicans who control the Capitol need to protect their constituents from having that happen in November."

Bond said the funding needed to give Oklahoma's 42,000 public school teachers a $5,000 pay raise could be realized by eliminating what his organization has identified as "wasteful or nonessential state government spending."

But finding that revenue will be a difficult task for lawmakers, who already are grappling with a $1.3 billion hole in next year's budget and potential looming cuts to schools, prisons, health care and other state services.

By SEAN MURPHY. Copyright 2016 The Associated Press. All rights reserved.
This material may not be published, broadcast, rewritten or redistributed.