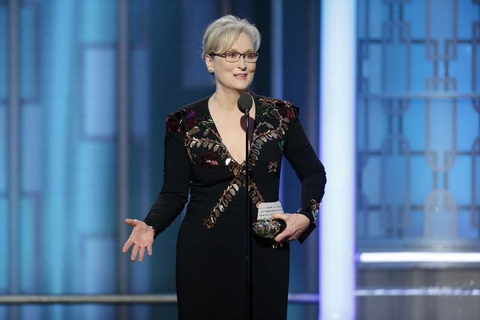 The actress never mentioned Trump by name, but it was clear who her target was in pointedly saying that a performance from the past year that stunned her came from the campaign trail. AP photo by Paul Drinkwater.

BEVERLY HILLS, Calif. (AP) — Meryl Streep's acceptance speech after receiving a lifetime achievement award at the Golden Globes turned out to be the opening volley in a war of words with President-elect Donald Trump.
The actress never mentioned Trump by name, but it was clear who her target was in pointedly saying that a performance from the past year that stunned her came from the campaign trail. She noted an incident where "the person asking to sit in the most respected seat in our country" imitated a disabled reporter from The New York Times.
"It kind of broke my heart when I saw it," she said. "I still can't get it out of my head, because it wasn't in a movie. It was real life."
Streep said that "when the powerful use their position to bully others, we all lose."
Trump responded in a series of early morning tweets, calling Streep "one of the most over-rated actresses in Hollywood" and "a Hillary flunky who lost big." He also defended himself against claims that he was mocking Times reporter Serge Kovaleski.
Streep's comments on Trump also drew a backlash among conservatives on social media, including Senator John McCain's daughter, Meghan McCain, a Fox News host who has been critical of Trump.
"This Meryl Streep speech is why Trump won. And if people in Hollywood don't start recognizing why and how — you will help him get re-elected," McCain tweeted.
Streep used the Globes, which are handed out by the Hollywood Foreign Press Association, to highlight the diverse background of several of her colleagues and defend journalists.
Streep noted that "Hollywood" is a reviled place. But she said that it's really a community filled with people from other places united in the mission to show different people and make audiences feel what they feel.
"Hollywood is crawling with outsiders and foreigners, and if we kick them all out, you'll have nothing to watch but football and mixed martial arts, which are not the arts," she said.
Streep put in a plug for vigorous journalism, urging that contributions be made to the Committee to Protect Journalists.
Besides endorsing Clinton for president, the actress has been aligned with President Barack Obama and first lady Michelle Obama; the president lauded her (and admitted a crush on her) when he presented Streep with the Presidential Medal of Freedom award in 2014, the highest civilian award in the nation; she traveled with Mrs. Obama as part of the first lady's Let Girls Learn initiative. Streep was also in attendance at the Obamas blowout farewell party at the White House on Friday with a host of other A-list celebrities.
While Streep won the annual Cecil B. DeMille Award and can boast of 48 Oscar and Golden Globe nominations, her career is still current. She was nominated this year for her portrayal of a bad opera singer in "Florence Foster Jenkins."
She mentioned Carrie Fisher, who died just after Christmas, and how the actress and writer urged others to "take your broken heart and make it into art."
She was introduced by fellow actress Viola Davis, who said her husband urged her every day when she worked with her to tell Streep how much she meant to her. She was too bashful then, but not on stage Sunday.
"You make me proud to be an artist," Davis said. "You make me feel that what I have in me — my body, my face, my age — is enough."