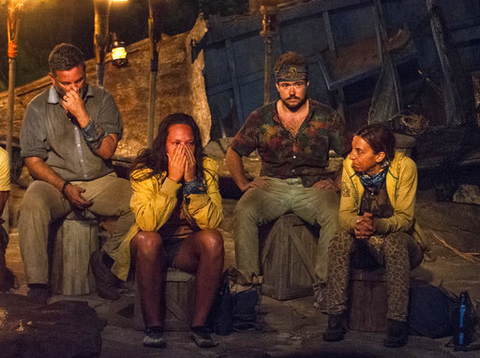 "Survivor" contestant Zeke Smith was outed as transgender by fellow competitor Jeff Varner on Wednesday night's episode of the CBS reality competition. The move has prompted online criticism and condemnation by a major LGBT rights group.

Varner made accusations of "a deception" before revealing that Smith is transgender on the episode. Varner was immediately criticized by other players. He repeatedly apologized, but was voted out of the competition.

On the contrary, he now says appearing on "Survivor" was a step toward becoming the man he wants to be. He writes in The Hollywood Reporter that by calling him deceptive, Varner invoked "one of the most odious stereotypes of transgender people, a stereotype that is often used as an excuse for violence and even murder.

"In proclaiming 'Zeke is not the guy you think he is' and that 'there is deception on levels y'all don't understand,' Varner is saying that I'm not really a man," Smith continues, "and that simply living as my authentic self is a nefarious trick. In reality, by being Zeke the dude, I am being my most honest self — as is every other transgender person going about their daily lives."

"Zeke Smith, and transgender people like him, are not deceiving anyone by being their authentic selves," said Nick Adams, director of GLAAD's Transgender Media Program, "and it is dangerous and unacceptable to out a transgender person."

Adam noted the show of support Smith had received since the episode's airing.

"Moments like this prove that when people from all walks of life get to know a transgender person, they accept us for who we are," he said.

GLAAD said it worked with Smith and CBS "for several months" to prepare Smith for the publicity blitz that would accompany the episode's airing.

"Survivor" host Jeff Probst added to the opprobrium against Varner.

"I cannot imagine anyone thinking what was done to Zeke was OK on any level, under any circumstances, and certainly not simply because there was a million dollars on the line," he told Entertainment Weekly. "You just don't do that to someone."

"Let me be clear, outing someone is assault," he says in his tweet. "It robs a strong, courageous person of their power and protection and opens them up to discrimination and danger. It can leave scars that haunt for a lifetime."

"Jeff Varner outing Zeke is so wrong," tweeted Joethegreat in a typical post. "Took it to another level by connecting trans to deception."
_