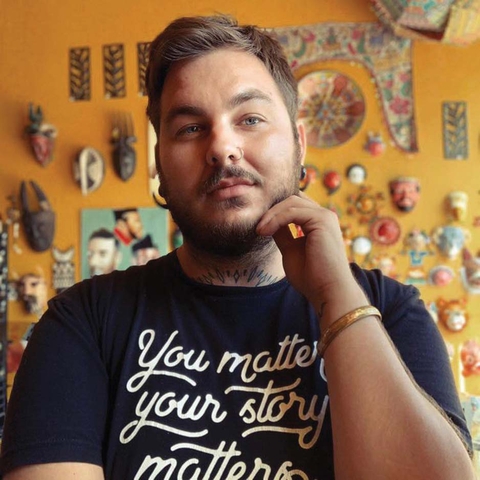 Parker Cunningham. The "gay son" who was the inspiration behind the Free Mom Hugs movement. Photo provided.

Parker Cunningham knew he was “different” for as long as he can remember. Even as a child, he noticed the way people would react when he would do anything that wasn’t typical of other boys.

“Their reactions were sometimes smirking, sometimes gasps, sometimes a concerned head shake from across the church gym,” said Cunningham. “They all let me know I was something they’d never experienced before.”

He said he began seeing stories about Elton John’s love life and Matthew Shepard’s death on television. Soon, he felt like he was old enough to start asking about his elusive Uncle Robert who lived with his “friend.”

“I was hearing the word ‘homosexual’ echo from the church pulpit in promises of damnation, and the dots began to connect for me,” said Cunningham. “They were speaking about me, people like me; homosexuals.”

When he was in third grade, he told both a school friend and his mom for the first time that he thought he might like boys.

His mom is Sara Cunningham, LGBTQ+ rights activist, author, and founder of “Free Mom Hugs,” an organization of affirming parents and allies who love the LGBTQ+ community unconditionally.

“I was so ashamed that I’d written it down in a Bugs Bunny journal so I wouldn’t have to say it out loud,” said Cunningham. “Both responses were so embarrassing and, yet, so dismissive, I immediately hurled myself back into the closet, and it became my secret again.

He said that continued for years, and it was a “secret” to different circles for different amounts of time.

“Our church taught lots about the rapture and the wrath of God on evil people,” said Cunningham. “So picture this: Me, a chubby, stressed out, gay as hell, repentant third grader sitting on a pew at church, realizing who I was and simultaneously being told through sermons, by my pastors and my church family, that the kind of person I am would be left alone to burn for eternity without my loved ones.”

He said this was the beginning of a specific kind of shame that is quiet and powerful.

“This forged the belief that if God didn’t want me, if his love couldn’t fix me, if I weren’t good enough or strong enough to change or to be ‘healed,’ then I must just be the worst kind of kid.”

Cunningham said he would go down to the front during “altar calls,” benedictions and he would weep while they’d pray over him.

“It wasn’t until I was a teenager that I realized all the prayers began by including wishes for me to be healed from things like ‘worldly desires,’ ‘matters of the flesh,’ ‘sins disguised as true love,’” he said. “They’d lay their hands on me and sympathetically converse with God, asking that I might ‘turn my eyes back to Jesus’, asking for God to grant me the desire to pray when, in reality, I was praying every waking second of every day to not be gay.”

Cunningham said all the times he ran to the front and wept, he never once said he was gay or admitted he was struggling with homosexuality. Before he started coming out, the church was his family. The church was his safe place.

“How’s that illustration? That it was easier to exhibit my shame in front of a crowd, week after week for decades, having them surround me and lay their hands on me to pray that I might become a different person than it was to tell my spiritual leader something they already knew.”

He said the entire atmosphere felt immediately different. He was asked to sing less, serve less. Eventually, he felt no longer welcome in the place that raised him.

In high school, he started coming out to his peers.

“News travels fast here,” he said. “It wasn’t long before the thoughts, and personal opinions of neighborhood parents began to turn into full conversations that filtered back to my church out of ‘concern’ for my ‘wellbeing.’”

Then he decided to tell his parents, beginning with his dad, Rex.

“It was November of my freshman year,” said Cunningham. “I knew he was going to handle the shock better than my mother and I was at a point where keeping this from my family was eating me alive. He had a few gay relatives, and I knew the word itself would not kill him on the spot as I’d always feared it would my mother.”

He said his dad asked a couple of confirming questions then replied, in typical “dad” fashion, “Okay, we’ll figure this out. Just don’t tell your mom ‘til after the holidays?”

The first time he told his mom, she said, “Please, just don’t be gay.” He was in elementary school and was trying to communicate that he liked boys. He said that was a phrase he would hear several times from her over the years.

“My immediate reaction, even as a kid, was always to empathize,” said Cunningham. “I didn’t want me to be gay either. She would beg me to ‘just focus on school,’ and she would pray over my room while I was gone. It wasn’t ‘til I was older that, when she’d beg me not to be gay, it also carried her fear of the world and how it would treat me.”

Cunningham had heard about the “places that could cure you from homosexuality.” He said there was a time in his life, especially as a young kid, he would have gone willingly and happily so.

“I saw my friends struggle like I thought I was doing alone,” he said. “We were clinging to a faith that rejected us and to our families that we literally couldn’t have lived without. I waited as my friends went through conversion therapy, praying that they would make it out alive but also that it might work, and they would be what their church and their families wanted them to be.

As for his “free hug” mom; “I really did spend my whole life coming out to her. I’ve been coming out, over and over, since I was eight years old. I can tell you that coming out is never got easier necessarily, but I did learn a lot about grace, and that’s what got me through.”

Parker said he was 21 when he felt like his mom finally accepted he was gay.

“I’d been seeing someone more seriously than anyone else before, and I had to make it clear to her if she could not accept me for who I was, she would also miss out on the rest of my life,” he said. “It still took some time, but that’s when she started getting educated, finding resources, reevaluating her faith and, ultimately, becoming the activist she is today.”

His mom went to her first Pride event in 2014, which Parker refers to as a monumental time and place for them, just standing there with him and his friends.

“But I wasn’t sure if she’d ever attend another.

“The next year, during Pride 2015 festivities, I couldn’t find her anywhere once we got there,” he said. “She’d said something weeks before about wearing a button and offering hugs, but I didn’t know anything else. So, I’m there, looking for my mom and I hear different LGBTQ+ folks passing by saying things like, ‘Did you get a hug from that lady?’ and, ‘That was the best damn hug!’. I thought...no way.”

Then, he ran into his mom in a crowd of people.

“She was wearing a pretty dress with a button that said, ‘Free Mom Hugs.’ She was a little sunburnt and covered in glitter.”

RELATED: When parents of same-sex couples refuse to attend their wedding, this mom steps in

“When she started her journey, she said she was going to fight for me like her hair was on fire. Little did we knew she’d start a wildfire, reaching so many people from so far away. It’s so easy to feel like we’re not doing enough sometimes. But seeing all of these fully affirming parents from all over the world stand up and stand beside us, it gives me an incredible amount of hope.

I tell her all the time, our ability to be on this journey together, to tell our story and watch Free Mom Hugs explode; it makes up for so much lost time we could have had together in my younger years.

Today, Cunningham likes to spend as much time as possible working on creative projects, showing my art, or playing my music around the city when I can. I also love to cook, eat and learn about food.

Although he was married for a while, Cunningham is currently single.

“Oh my god...I’m still looking for my chapstick!” he exclaimed. “No major types or physical parameters here, you shouldn’t have them either. My long-term relationship goal is to keep on loving my damn self and would consider making space for really any incredible dudes.”

One caveat, “Must love moms!” 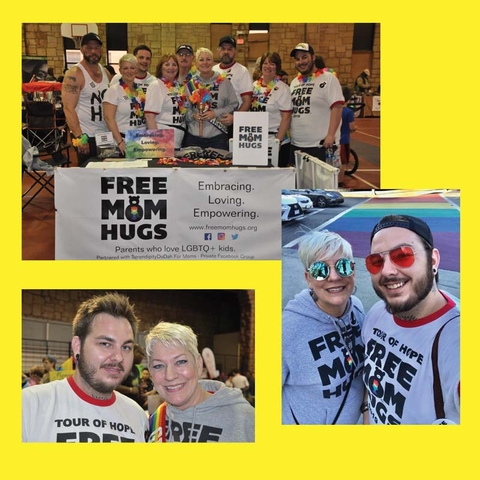 Sara & Parker Cunningham and a part of the "Free Mom Hugs" team.

RELATED:The mom who made it “cool to love your gay kid”